You don’t have to look far off into the distance to see a “Blue Sun” rising, thanks to the latest single from Israel Chavarin’s Everything But The Everything. Israel, better known as Bay Area producer, songwriter, and concert promoter Izzy The Gent, just released the song at the end of May, a collaboration with singer Olivia Barchard. Barchard, who provided guest vocals on “Blue Sun,” is best known for her critically acclaimed bands Moon Museum and Breakdown Valentine. She adds a lot of pizzazz and power to the indie rock track, very reminiscent of a ’90s alternative sound.

The collaboration with Barchard came about when Izzy heard Moon Museum’s latest release and was so impressed that he contact her to see if she’d be interested in teaming up. Fortunately, she said yes, and the result is “Blue Sun.” Barchard is not the only collaboration Izzy has been a part of. In fact, his whole approach to writing and producing as Everything But The Everything is to team up with a specific voice for each track. Some of his more recent musical partnerships have been with Sophia Prise, Luke Sweeney, and Vacances.

To discuss “Blue Sun,” being a producer, acting as a Bay Area promoter, indie rock, and what has inspired him with Everything But The Everything, we recently caught up with Izzy for a chat about his dynamic new musical venture.

Israel Chavarin: “I feel great about the state of music. Every day, there is a festival lineup being announced. Musicians, bands, artists, venues… everyone is excited about concerts, art exhibitions, and festivals coming back. I think we will all appreciate going out and seeing live music a little more after the traumatic experience of having it taken away. I will certainly be more enthusiastic to hear that opening band, that’s for sure. The gumption shown by people in the industry to adapt and deliver live performances via livestream at a time of great need, was outstanding. Livestream shows became such a great crutch for the fan and the artist.”

You just released “Blue Sun” and the song is fantastic! What is the story behind this collaboration and you working with different singers for each single?

Having a different singer was what I always wanted to do with Everything But The Everything. It was taking a page from house music producers who are constantly putting out music and featuring different singers. I always enjoyed that and it made their collaborations feel extra special when they would record together again. In my case, I benefit from the different energy each singer brings to the table, sparking different ideas for my imagination as the track evolves. Hopefully that means the music can continue to move along stylistically.

‘Blue Sun’ came about due to that process and why now I see the band as a collaborative more than ever. Case in point, when I wrote the bassline to ‘Blue Sun’ and started to write the guitar part, I got stuck. So I called my friend Jimmy Chen and he came in and laid down those beautifully layered guitar lines. Then I heard Oliva Barchard sing in her new band Moon Museum’s debut single and reached out to her immediately. In our conversation I offered to send some samples and she chose what became ‘Blue Sun.’ The song came together so quickly once we got rolling. The drummer Landon Cisneros from Spirit Mother swooped into the studio once the vocals were done and quickly knocked out the drums. It really was a great collaborative effort.

What is the behind the scenes process like for your music? Do you produce everything yourself?

For the most part, I produce everything myself. I will play bass, keys, and guitar over a drum machine pattern till I reach a point in the song where I can’t add anything else. Then I will pester my homie Andrew Gomez from NRVS LVRS to contribute some synth elements to the music. Songs are then sent to the appropriate singer, then to the drummer, all overseen by Rex and myself. I record with Rex Shelverton who is very knowledgeable about music having played with Vue who was signed to Sub Pop Records, then to a major label. He is the engineer, studio producer and kind of an unofficial member since he tells me whether an idea is terrible or good.

We don’t always agree on everything, I value his input and most importantly, he gives the music a sound. I know what I’m looking for sound wise but don’t know how to accomplish that in the studio. That’s where I really count on Rex. Sometimes Rex will just add the sound he thinks is best, I’ll sign off and we’ll roll.

Do you plan to put out another single or any music videos anytime coming up?

The next single ‘Denial’s,’ featuring Tobias Hawkins, is cued up and ready to roll. We are just going to wait two months from the release date of ‘Blue Sun’ to release the next single. Unfortunately no music video soon due to the needed larger investment. I’m always unrealistically optimistic of a windfall of cash coming my way though. Fingers crossed.

I see that you’ve been a successful promoter in the San Francisco area. Do you see shows coming back quickly now, and do you have any plans to play live soon?

I see them returning quickly because everyone is eager for their return. The fans, the venues, the bands, the websites, the promoters, the vendors, the purveyors… the endless chain of all involved in the entertainment industry is ready to pounce. I have no plans to play soon unless a show is offered that is a show I cannot turn down.

Many artists take the independent route fully these days. From tracking their own music to releasing and promoting it on their terms. Do you see this as an ideal route in the industry, compared to years ago when labels controlled most of the star power?

I believe it depends on what an artist and their team can handle in regards to staying independent. The independent route is great due to total control of the output, but let’s be candid, as you grow, you’ll need a team, then a team to work with the team. If an artist can be profitable and handle all aspects of being a business, then why pay a label any money. However, we live in a world where connections matter and a label and all their clout can take an artist that’s plateaued or inching along and place them on the fast lane. Unfortunately, that comes with a risk of being shelved, mismanaged or barred from using your own name or releasing new music. You have to outsmart the wolf when dealing with major labels and make sure you’re on good legal ground.

Amor Amor’s ‘Pieces of Summer,’ Montreal’s Melotika with her latest single ‘Crazy,’ and definitely Vacances and his catchy track ‘Berlin’ are all the latest new singles I’ve added to my Spotify playlist.

How would you describe your sound to someone who hasn’t heard Everything But The Everything before?

If you could only choose between playing live shows or working on albums in the studio, which would you go with? We find that artists tend to favour one over the other.

A couple of years ago I would have chosen to play live shows. It really is the best part when you go into a venue and load in, do soundcheck, talk to the other bands, the venues staff and then you get to play a show! When the band is firing on all cylinders, it’s a high, pure and simple. However, now I see the direct correlation on how releasing great music is directly tied to what kind of shows you are offered and how they are attended. I want to focus on getting some real traction with a release, then pursuing bookings.

The indie rock genre, despite having many different sounds, has gone through waves of being popular. Do you think rock and the indie sound is coming back full force in 2021 and beyond?

From a promoter’s perspective, I don’t know if styles of rock ebb and flow as much as we think they do. I believe it’s more of where our attention goes at that particular time and how a particular type of music is being used via placements in FM radio, movies, advertisement, etc. Slayer, Megadeth, and Dave Matthews Band will continue selling out venues. Some of the borderline fringe genres like hair metal, glam, or hard rock, I could see becoming more prominent in the near future. I could just totally see kids today putting on a pair of bright spandex and wrist/head sweatbands for the first time and thinking, ‘we should dress like this and start a band!’ totally unaware of what they are bringing back.

Well, I hope it’s Wild Nothing since I keep raving about them but ZZ Top has really been an artist that I keep referring to and channel in a lot of ways. I love the straightforwardness about their music. It’s party music that has some real weight to it. I tell myself all the time that Chromeo, whom I also love, are today’s modern-day ZZ Top.

What’s next for you, the band and what drives you to keep going as an artist? 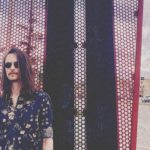 It’s All About Who You Know with The Desert Island Big Band’s Single “Here, Then Gone” [Premiere] 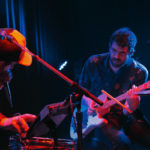 Track By Track: The Harpoonist & The Axe Murderer Detail the Various Shades on ‘Post-Apocalipstick’