In 2021, the heavy music scene in the UK just gets better and better. This year has already seen Architects hitting the top of the album charts and Sheffield bruisers While She Sleeps snapping at their heels with their game-changing offering, Sleeps Society. What about the rest of the pack, though? Well, one name that has been hovering around the top end of the pack is Southampton metalcore crew Our Hollow, Our Home and, with the release of their third album, Burn In The Flood, they’re ready to throw their name into the mix.

A band who aren’t afraid to dig into their own emotions for their art, Burn In The Flood may not be the absolute heart wrecker that their previous offering, 2019’s In Moment // In Memory, was but there is still plenty of emotion-packed within these twelve songs to smack you right in the feels. Written through one of the toughest years any musician could face, Burn In The Flood is a bruiser of a record inspired by the struggles they faced on both a musical and personal level. However, where In Moment // In Memory saw guitarist Tobias Smith reflecting on the heartbreaking grief experienced at the death of his father, Burn In The Flood showcases a group who are fighting their way through their hardships. “Better Daze” and “Nerv” are just two examples of the determination to overcome their troubles but even in the darker moments on this album, this positivity and determination pulses through.

Thankfully, having thrown their all into songs as personal as “In Retrospect” and “Remember Me,” the Southampton band haven’t skimped on anything when it comes to the music either. Predominantly teeth-rattling metalcore, the band chop into the mix some delicious pop-like melodies, some atmospheric electronics and some truly mind-losing breakdowns with the whole lot colliding thirty seconds into the stunning “Children of Manus” to create music as beautiful as it is brutal. This collision of genres sees the band hitting their absolute peak as everything just falls into place on the highlight of this absolutely stunning piece of work.

“We are the voice you can’t ignore” roars frontman Connor Hallisey on “In Retrospect.” I couldn’t have summed up Burn In The Flood better myself.

Burn In The Flood Track Listing: 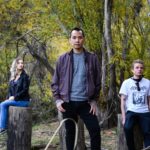