For the casual observer, perusing record bins down at the local Kmart back in the day, one image (likely) comes to mind (quickly) when recalling the Ohio Players — nekked ladies. However, for their more fervent legions of faithful followers, it wasn’t what was pictured on the covers of their albums, it was what was oozing from the grooves that earned our attention and ignited our passion.

After slogging through the ’60s, the dudes from Dayton began to bubble in the early ’70s with a series of provocatively packaged, modest-selling LPs on the Detroit-based indie Westbound label. As a result of signing to mega-sized Mercury Records, their fifth studio set, Skin Tight, became a million-seller that birthed the soon-to-be staples, “Jive Turkey (Part 1)” and the Top 20 title track. Fueled by the chart-topping R&B/pop crossover sensation, “Fire,” their sixth album, Fire, also scorched the #1 spot on both charts. Their next album, Honey, proved an even sweeter seduction in late ’75 — going platinum and delivering three Top 40 hits, including the iconic, “Love Rollercoaster.” By the time their eighth studio album, Contradiction, dropped worldwide 45 years ago this month (May 1976), the Ohio Players were hot as a pistol.

Darker than Earth, Wind & Fire, more dangerous than Kool & the Gang and (way) dirtier than the Commodores, the Ohio Players were the real deal — the “Stones” of the mid-’70s soul scene. And they were MY guys! While classmates doodled Zeppelin logos on their denim bellbottoms, I was creating notebook-sized cartoons of the Players, often placing myself in the middle of the funktastic combo, wishing that I too could join them on-stage — with a massive afro, a polyester jumpsuit and monster platform shoes. Aw, c’mon! You mean I’m gonna STAY this color?

In that wonderfully innocent, shag-carpeted, zodiac-crazed, pre-Internet era, the top music artists of the day typically released two new albums during any given 12-month period. Hence, Contradiction hit while Honey was still hot. With their preceding three studio sets, the band succeeded famously in combining elements of modern jazz with smooth soul and nasty funk. While Contradiction also possessed similar DNA, it owned a unique identity. Although it would (barely) miss the Billboard pop/rock Top 10 (peaking at #12), the album still achieved “gold” status.

Of the record’s funkier fare, the harmonica-heavy “Far East Mississippi” was a stanky delight — textbook Ohio Players, for sure. The sole crossover hit “Who’d She Coo?” not only topped the soul chart, it also cracked Casey’s Countdown. Ultimately reaching #18, it sounded like a street par-tay! Are you ready? Yes, I was. And I still am! However, it can be argued that the hottest Contradiction highlight was “My Ladies Run Me Crazy.” Brimming with brass, this big city standout was punched-up to perfection by the rock-meets-jazz-meets-funk drumming and schitzo timbale contribution of James “Diamond” Williams. The track was further nailed to the floor by the bottom-busting basslines of the turban-topped Marshall “Rock” Jones.

Boasting a positive message of unconditional peace and love, the delicate closing track, “Bi-Centennial” celebrated a “happy time” in our nation’s history — join the race, save this place, we must keep the faith — a timely message that’s as relevant today as when it was first heard back in the spring of ’76.

Of the group’s seven “classic-era” members only Beck, Williams and Pierce are still will us. However, the music made by the Ohio Players will live forever. And Contradiction remains a mighty album — one truly worthy of their impeccable legacy. 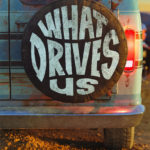