Sharp, cutting, and combative, Love Ghost are back and ready to take a bite out of you with their brand new EP, Sabertoothed! A talented group that we have featured in the past on more than one occasion, Sabertoothed is a colossal onslaught of guitar-powered alternative rock with an emo feel.

Produced under the watchful eye (and ear) of the great Danny Saber (Rolling Stones, Marilyn Manson, David Bowie), the EP is a stripped-down collection of four songs that acts as something of a tribute to the pioneers of ‘90s grunge. Recorded just before the pandemic rocked our world, Sabertoothed focuses on the internal battles and clashes that go on inside of us as we carve out our path through life. We all feel unwanted or even unliked, and these songs acknowledge these states of mind, while still encouraging you to stand up for yourself and not lose hope.

Commenting on the context within which the EP was composed, the band stated, “This album was written our senior year of high school. We were barely at school, we were just working on music. Every afternoon we would go work in Danny Saber’s garage. The songs represent the internal battles we were going through at the time.”

Based out of Los Angeles, Love Ghost occupies a space in between ethereal grunge and lo-fi hip-hop with an emotionally-charged element that underscores many of their songs. As you may have expected, the members of the band grew up on a lot of grunge and ‘90s alternative, but also some of the more modern, dynamic hip-hop artists, such as Juice WRLD, XXXTentacion, Lil Peep, City Morgue, and $uicideboy$. The band started to really hit their stride in 2019 when their lineup was finally set and they began to build an international fanbase as a result of a lot of touring in places as far and as wide as Ireland, Japan, and Ecuador.

Teaming up with Saber has proven to be the break that Love Ghost needed and they have been riding the momentum ever since. All that’s left is for the band to get out on the road and show the world what a powerhouse they are proving themselves to be. 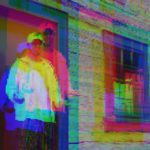