Growing up in Chicago, acclaimed singer/songwriter Shawn James started out his musical journey studying opera and classical singing in a Pentecostal Church. Now, in 2021, that journey has brought him to the release of his stunning new album, The Guardian Collection. (Find the vinyl version here.) With the release of the album, and fantastic covers of “Rake” by Townes Van Zandt and “Like A Stone” by Audioslave, there was plenty to talk about with Shawn but, where better to start, than at the beginning of his wonderful musical story.

Thanks for your time Shawn, how is life treating you at the moment?

Shawn James: “In spite of all the obstacles 2020 has presented, I truly can’t complain in the grand scheme of things.”

Let’s start at the beginning and your early days singing in Gospel Choirs. What did you learn from those experiences?

“I watched folks releasing huge amounts of emotion and dealing with their life’s struggles through the music they all sang together in church and that shook me at a young age.”

Do you remember the first time you became aware of music and who was the artist that changed your life?

“Music was always around me so I don’t remember a time without it. My mother said I was singing since I was young so I feel like I came into “consciousness” with it already there and I’ve never known what it was to be without it. I couldn’t begin to narrow down all the artists that have had a big impact on my sound and style. I’m all over the place musically.”

How much of encouragement were your family in your early days singing opera/classical music?

“My mother was a constant source of encouragement and support for my music throughout my entire life.”

What did you get out of singing on an emotional level?

“It was and continues to be very beneficial to me in many different ways. It’s therapeutic, healing, and emotionally cleansing on a deep level for me. It allowed me to release and express the experiences, emotions and so much more that I was processing at a young age and helped me to move past it all.”

You started writing your own material in your mid-twenties and what did you want listeners to get from listening to your songs?

“I don’t think I was really thinking about that at first. I was focused on what I wanted to say about my experiences and getting things off my chest. Then, after people started paying attention, it made me think a bit more about what I wanted to say and how it was coming off to others. Ultimately, I want to inspire people, help others release emotions or possibly put feelings into words and music that helps someone who didn’t know how to express it, and hopefully make a positive difference in people’s lives like others music has done for me many times in the past. I’m continuing the cycle in a way.”

You’ve been inspired by artists like Tom Waits and Otis Redding. What do you take from those artists into your own music?

“I learned a lot from those two about intense performances that give chills, style and expression of one’s own unique voice and traits, and using your vocal power and softness to accentuate a song building powerful peaks and peaceful valleys in music.”

And you now have a new album out, The Guardian Collection, what can you tell us about it?

“In 2019, I put out an album called The Dark & The Light. It was my first record with Parts and Labor Records with producer Jimmy Messer. It’s a beautifully layered and filled out record and I absolutely love it. I wrote those songs with just an acoustic guitar and my voice. The songs shone bright in the produced layered way that we made them but the stripped-down core wasn’t represented. With The Guardian Collection, we stripped down around half of the songs from The Dark & The Light that acoustically shone on their own. It gave the songs new perspective.

The other half of The Guardian Collection consists of covers, a re-recorded version of a song called “Through The Valley”, and a new song called “The Guardian” for a Sony PlayStation game called The Last Of Us Part Two. It was a really big opportunity for me and a pivotal moment for me. I planned a whole year of touring before the pandemic hit and due to it, I re-recorded some songs and covers to keep the story going and give people something. This is where The Guardian Collection came from. When a song is stripped down, you can really see what the song is on it’s own with just a voice and instrument. The foundation must be solid. That is what I love about this record and presenting the songs in a new way.”

Can you tell us about your cover of “Rake”, and in particular the video?

“I’ve always been a big fan of “Rake” by Townes Van Zandt and have played it live for many years now. Something about the way this year was going and the timing of it all pushed me to do my own version and video for it. It’s sad, melancholy but also gritty, genuine and wise at the same time. I love the reflective qualities of the lyrics where Townes in examine himself and showing you his faults and how it affects him. We wanted the video to reflect those things and that how we came up with the storyline and flow. It’s a sad time for venues and musicians around the world right now and we wanted to shine a spotlight on that in hopes of raising funds to help them survive the pandemic.

Please take the time to read up on what you can do to help: https://www.nivassoc.org/, https://keepmusiclivewa.com/.

These are tough times for the music industry and artists across the globe. How has the pandemic affected you both mentally and emotionally with not being able to perform live and how do you deal with that?

“I’m not gonna lie and say it’s been easy. In the beginning of this shutdown, I found myself feeling down and not really wanting to create anything or feeling any inspiration at all. After I allowed myself the space to not even think about anything musical for awhile, that’s when it started to come back to me naturally and I’ve been writing new songs since August.”

You also recorded a brilliant Audioslave cover. Was Chris Cornell a big influence and, despite your own qualities, did you have any worries about paying your own tribute to such an iconic rock frontman?

“Honestly, I wouldn’t say he was a big influence on me but I always admired his vocal capability, emotive singing and lyrical content. I don’t worry about covering great artists since I’m not trying to compete with them. Their originals will always be the best versions in my opinion. I look at playing covers as tributes to the great artists and paying respect to their legacy.”

So, the album is now out, providing life returns to some normality in 2021, what are plans for 2021 or, like the rest of us, are you playing a waiting game?

“I’m definitely playing a waiting game in regards to touring and that lifestyle but it’s opened up other areas for me to focus on in the meantime. I’m currently writing a new album and I’ve only got a few more songs left. I’m gonna get into the studio late winter / early spring and have new songs ready for everyone soon!”

Thanks for your time and good luck with the album. Just to finish, how would you sum up 2020 and what are your hopes for 2021?

“2020 has been a learning and growing experience like any other year but with more inward reflection for me. I hope to move into 2021 with a healthier mindset and continue to make music that I love and sharing the live experience of the music with people at shows again.” 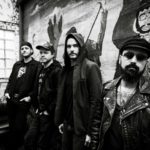