Intimate, evocative, and thought-provoking, Animalweapon has arrived with his reflective new single, “Summer’s Over.” The song is the first track to be debuted from the artist’s brand new EP that’s scheduled for a Spring 2021 release via Polychromatic Records. It’s a label where Animalweapon, also known as Patrick Cortes, can feel right at home with their focus on synthpop, shoegaze, synthwave, and indie releases.

Although hard to pin down, Cortes’ music thrives somewhere between electronica and indie, somewhat reminiscent of Phantogram, The Postal Service, and Baths. A do-it-yourself kind of artist, Cortes has become a fixture of the indie, electronic scene in his native Raleigh, North Carolina over the last decade. Initially, a side project developed in 2010, Animalweapon soon became Cortes’ chief musical pursuit, with various LPs, EPs and singles released over the last several years, including his sophomore full-length Tyrannosaurus, released last May.

We pushed music aside for a few minutes and spoke to Cortes about ink for the latest entry in our Tattoo Talk interview series. Read on as Cortes describes his Harry Potter and Star Wars tattoos, his favourite tattoo shops, and what famous actor’s face he’d get tattooed on his body if he had to.

Animalweapon: “March of 2014 at Oak City Tattoo in Raleigh, North Carolina. The Morse code tattoo on my right arm. I get a lot of questions about it because no one knows what it means and I’ve always kind of just said ‘I don’t have an answer that’s both short and interesting,’ so I guess this is my chance to explain it, right?

Long, nerdy rant incoming: There is an incredible album by BT called This Binary Universe that came out in 2006. It’s seven tracks, all instrumental, all long-form, all classically-structured. The heart of it is ambient electronica, but it’s also colored with IDM, shoegaze, classical music, jazz, even a little hip-hop. Lots of weird meters and lots of glitch rhythms, but also features instruments that were hand-built by BT (who by the way is a Berkeley grad who seems to have been a fucking musical prodigy since he was a child) and software that he developed himself, as well as using his own found-sound, and a 110-piece orchestra.

And he produced the entire goddamn thing in his own studio himself, a lot of it with his then-infant daughter sleeping in his lap, and mixed it once in stereo and once in 5.1 surround because, oh yeah, the album comes with a DVD that has a short film for each track on the album. It is far and away the most brilliant, ambitious album I have ever heard. There are entire bands that don’t put in as much work in their entire careers as BT did on this one album. As for my tattoo, the album art and DVD use a Morse code motif in the artwork, and my tattoo is the Morse code for the track ‘1.618,’ which I consider to be the height of what I aspire to as an artist. (You can see why all of that is a lot to explain when people ask what the tattoo means.)” 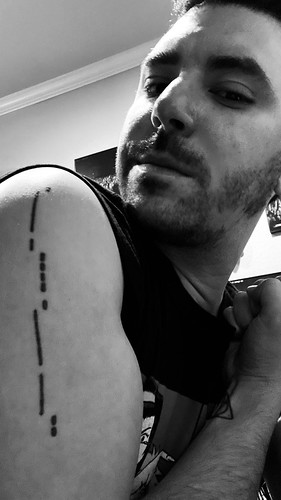 “My second tattoo is my Deathly Hallows symbol. It’s a little cliché because first of all, obviously Harry Potter is hella nerdy, but I came of age with those books and they mean a lot to me so whatever. I own my nerdiness and the happiest day of my life was whatever day I realized I don’t really give a fuck what anyone thinks about that.”

Do you have a specific shop or artist that you frequent?

“This is a little different, because I have someone I want to plug who I actually have not yet gotten ink from, but I’m absolutely going to next time I’m ready. If you’re in the triangle area in North Carolina, please go see Kelly at Ascension Tattoo in Chapel Hill. She does amazing work and I can’t wait until I’m settled on my next tattoo cause I’m absolutely going to go to her for it. Incidentally, her then-fiancé, now-husband Micah, helped me out with some important stuff for Tyrannosaurus. We recorded a lot of stuff for the title track in one evening at their home, with their stinkin’ cute son Damian trotting in and out of the room.”

“Definitely have at least one more in mind for Kelly to do, but I’m keeping those close to myself until I get them! Sorry. I will throw you a bone and say I’m planning to expand my Millennium Falcon tattoo to have some blue engine streaks going down the rest of my forearm. That’s something I’ve been meaning to do for a few years and probably my next order of business.”

“I would call them ‘friends’ before ‘fans,’ although they are also loyal fans, but I actually know two people who have the AW symbol (designed by Blake T. Brady) tattooed on them. One of my friends has it on his wrist and the other has it on the right side of her torso, along with my signature. It is surreal knowing that someone has that on their body for life, but it’s incredibly humbling and it still pushes me to do more and better.”

“Nothing quite THAT bad, but basically all of my fleur-de-lis (inner right forearm, towards my elbow) hurt like a bitch. (Someone with more tattoos than I have is undoubtedly reading this and laughing because there are definitely more painful spots I haven’t gotten to yet. Which is fine; I’m just a wimp.)”

“Oscar Isaac. That man is a goddamned dreamboat. I’m straight, but I’m not that straight. Someone let him know I said this and if he listens to my music and digs it, I’ll get a tattoo of him as Poe Dameron (Isaac’s character in the Star Wars sequel trilogy). This is the most shameless thing I’ve ever done in my life, but oh well. Paul Rudd is runner-up because he’s just a magnificent, wholesome being. I’d actually consider getting one of him doing the ‘Look at us…’ thing.”

“I’ve never gotten anything I hadn’t thought about for a long time and thoroughly. The whole point of a tattoo is that it’s there for life; you’ve inherently committed to it being a part of your body until the day you die. That’s why you wanted it in the first place. I can respect having a much more cavalier attitude about getting one done at random, but for me, it has to be a part of me. And as far as maintenance goes, I’ve been pretty slack about it; I’m due for some touch-ups.”

“The guy who did my Millennium Falcon was a huge Star Wars fan. I was originally going to get it in solid black, which would have looked like a shitty, unrecognizable blob. Thankfully he convinced me to let him do the entire design of the ship (top-view) with all the detail in grey shade. We spent the whole session talking about Star Wars, this was a few months after The Force Awakens came out, and he told me that if he could do only Star Wars tattoos every day, he’d be happy. It was so cool to have someone like that who connected with something I love as much as Star Wars doing that work, and he did an amazing job. I can’t believe he managed to finesse that much detail into such a small piece! Shoutout to Bill at Warlock’s.”