01. Lonely Robot – “Spiders”
– Lonely Robot, the project masterminded by producer, guitarist and singer/songwriter John Mitchell have released the video for new single “Spiders” taken from their fourth album Feelings Are Good out on the 17th July 2020 via InsideOutMusic.

03. Reptoid – “Planned Obsolecence”
– Reptoid, the one-man industrial/noise-rock phenom who unleashes alien sermons and maniacal sounds via homemade gear will release his debut full-length Worship False Gods through Learning Curve Records and you can prepare yourself with his new track right here:

05. Void of Vision – “Decay”
– Following the breakneck reception to their 2019 album Hyperdaze, Melbourne’s Void Of Vision have emerged with a new music video for album track “Decay”.

08. Mint Field – “Contingencia”
– Mexico City based psych duo Mint Field will release their new album on September 25 via Felte Records. Sung in their native language, expect reverb-heavy, scuzzy goodness and you can check out their new single here. 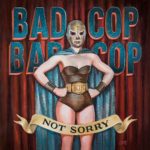