Gone but definitely not forgotten, Grey Daze is keeping the memory and legacy of Chester Bennington alive. The late great singer may have passed away nearly three years ago, but that hasn’t prevented the surviving members of Grey Daze from recording a new album, titled Amends, with Bennington providing lead vocals. How did they go about accomplishing such a task? Well, Amends is composed of eleven new tracks that use vocals that Bennington recorded all the way back in the 1990s during Grey Days’ initial run. With these vocals in hand, the rest of the band members got together and composed brand new music and instrumentals that complement Bennington’s inspiring and powerful words and melodies.

The project was initially started in early 2017 when Bennington and Sean Dowdell selected a few songs to re-record. The album was originally supposed to be released that year but was put on hold after Bennington’s passing. It sat on ice for quite a while before the band committed to finishing what they started. Once the remaining Grey Days members were given permission by Bennington’s widow, Talinda, to finish the album, granted they didn’t alter the late singer’s vocals in any way, it was full-steam ahead on ensuring that Amends would see the light of day and Bennington would be appropriately honoured.

With Amends arriving today via Loma Vista Recordings, we are honouring the album’s release with a special edition of Tattoo Talk wherein Sean Dowdell discusses his affection for tattoos and offers us a rundown of his body of art.

Sean Dowdell: “When I was 16, my friends Shannan Smith and Matt Simon got fake IDs and went into a tattoo shop called Artistic Skin in Phoenix, Arizona. I got a skull cutting his own head off from an artist (who would become very well known in later years) named Paul Stottler.”

“The most meaningful tattoo that I have is located on my back shoulder and it is a ‘rune symbol’ for love magic that I got with my wife, Thora.”

“Considering that my wife and I own a company called Club Tattoo, and have six studios in Las Vegas and Arizona, those are my go-to shops, of course. However, I have many friends in the business that I love that are artists like Nikko Hurtado, Randy Engelhard, Bob Tyrrell, Mario Barth, and many, many more.” 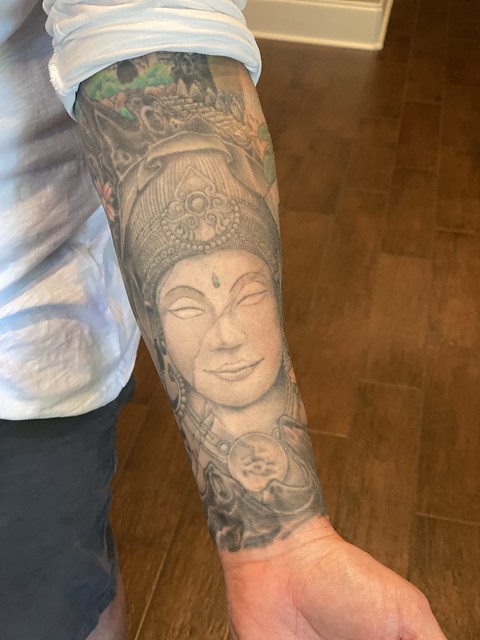 Have you seen any fans with a band tattoo, or anything crazy memorable?

“Of course, the ones that are especially near to my heart are when I see portraits of my late band member, friend and business partner Chester Bennington. Those always make me tear up.”

“I never did that, however, I was getting my first sleeve worked on from an artist named Chris Bailey at Club Tattoo back in 2002, 2003 and he recommended that I take this pill called ‘oxy-cotton’ because it would dull the pain. I had never heard of the drug prior to that and he gave me 30 mg. I was pretty much a drunk rhinoceros for the next eight hours and actually had to sleep at the shop because I was so incoherent. That was the first and last time I would try to ‘dull’ the pain and just dealt with it from that moment forward.”

“I do have a somewhat tribal kind of sun on my back that I am not really fond of that I will probably cover up soon. It doesn’t really speak to me or my values anymore.”

“Yes, my very first skull tattoo was the first tattoo I got and covered at my studio Club Tattoo by an artist named Chris Garcia. He created a beautiful phoenix and Tibetan skull that coincides with two foo dogs that run the lower length of my right arm.”

“Every tattoo I have was painful. I have never cried but yes close to it. The worst was my lower wrist on my left arm. Hurt… ridiculously.”

“Either my wife, although that is like the kiss of death for a marriage, or an important historical figure like Napoleon or Abraham Lincoln.”

“I am really thoughtful about any tattoos I get these days, I think through everything and design, etc. I’m not spontaneous with tattoos like I used to be.”

“The loss of my mother is the most personal experience that I have shared while getting tattooed and the birth of my son. Both were moments shared with an artist named Chris Garcia during one of our sessions on my right arm.”

Sleep Token – ‘This Place Will Become Your Tomb’ [Album Review]