Greater New York Area emo punk band Live Well are “living well” and, now about eighteen months since they first came together, the group’s debut album Perfectly Temporary is set for a September 6th release (pre-order now via Bandcamp). Created by singer and guitarist Paul Masbad and guitarist Max Johl after travelling the United States together in late 2017, the guys released First Demos and have been writing and recording relentlessly ever since. Several of these songs were used in the creation of Perfectly Temporary when the two musicians set up shop in Lumber Yard Recording Studios to work together with Ace Enders (The Early November) and Nik Bruzzese (Man Overboard) with recording of the debut taking place in August, 2018.

Rounding out the Live Well lineup is bassist and singer Luis Castro and drummer Neil Stafford. With the release of Perfectly Temporary imminent, the group are excited to share their nostalgic rock and deep-rooted lyrics with new fans via lots of live gigs, single releases, and album promotion. You may be curious as to where the name Live Well comes from. Well, that brings us to the topic of our latest guest blog entry from Live Well’s Paul Masbad; as a band they make sure they live well each and every day. They are a very conscientious bunch and today, Masbad shares with us how they attempt to ensure everyone around them feels heard and represented and how they try to set an example for others.

Guest Blog with Paul Masbad on how Live Well “Live Well” each and every day:

– It feels a little weird for me to talk, or in this case, write about Live Well and everything surrounding the band. Maybe, “weird” is the wrong word for it. Maybe, I still have a hard time talking about myself to complete strangers on the Internet or otherwise. And maybe, that fact makes it even weirder because, for the past year and change, I’ve been on a stage in front of strangers singing songs about my heartbreak, former drug abuse, and suicidal thoughts. Certainly, a person who can do all of that can easily write about their band and what it means to them, right? Well, no. I mean, I can, and obviously I will, but it’s hard to write about Live Well at all without mentioning everything that happened before I was in this band (or started it, whatever).

I am not good at making decisions. At all. I usually spend hours and hours thinking about doing something before I actually do the thing. And the thing can vary, you know? Maybe I need to make a phone call or send an e-mail. Or maybe, I’m taking a look at my life and I’m staring at a metaphorical fork in the road and I have a Robert Frost “Road Not Taken” situation looking back at me. Either way, I call and talk to a lot of people for advice and one piece of advice my mother would always give me was, “Live well, have enough and you’ll live a happy life.”

Wow. I would think to myself as a young person and, now, as an adult. What a great piece of advice. When, in reality, if you read it or say that to yourself long enough, it’ll start to sound like a banal platitude that you’d hear at a high school or junior college graduation (junior college because real colleges get people like John Green to talk about young adult stuff even though they left young adulthood decades ago). That being said, it doesn’t make Live Well any less meaningful. Not to me, my family, and my bandmates anyway.

Live Well’s debut album Perfectly Temporary is due for release on September 6th. Check out the debut album’s artwork: 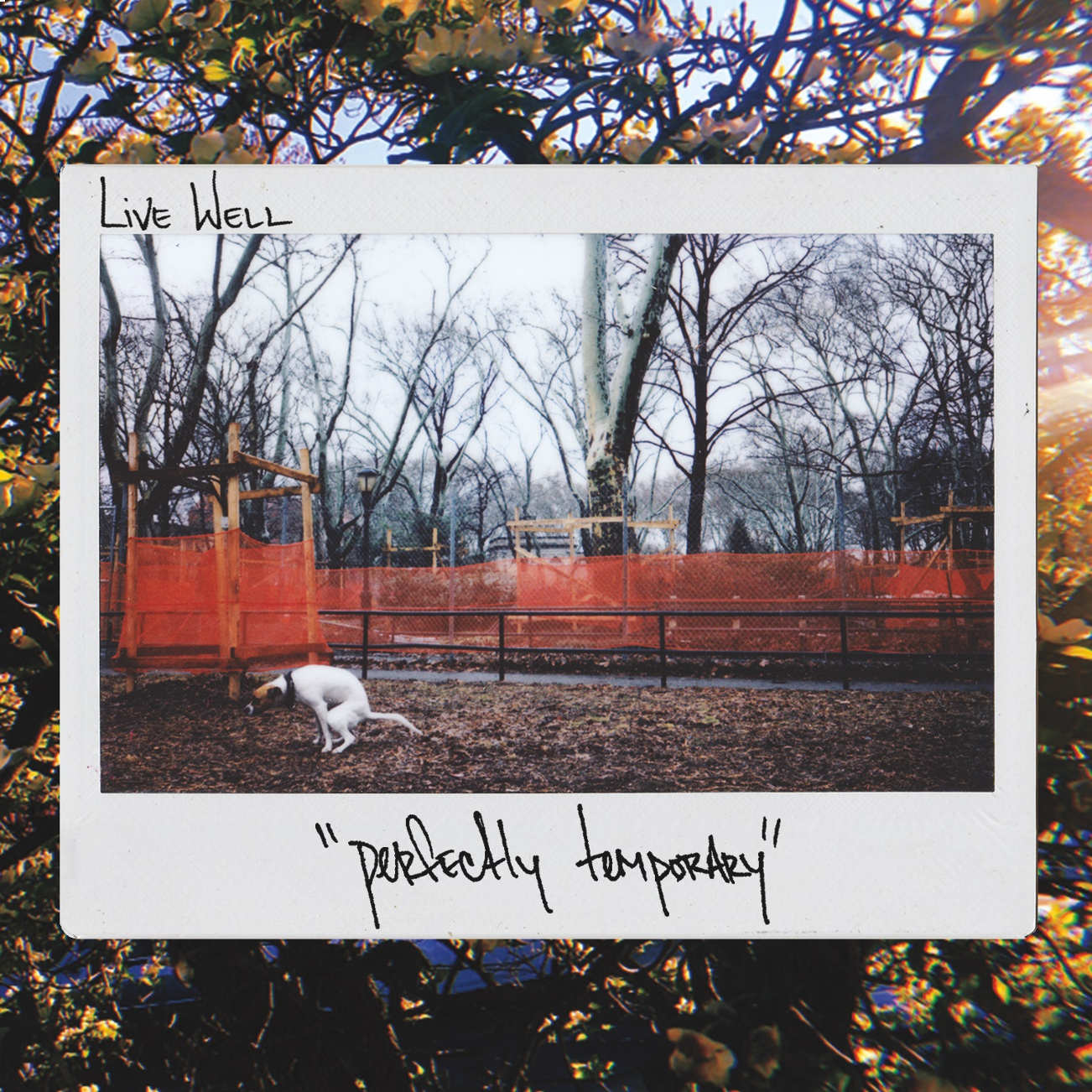 It’s something that guitarist Max (Johl) (the Tegan to my Sara, or is it the other way around?) and I got tattooed on ourselves before we even decided on playing music together. And in that moment, I wanted to tattoo my hands with my mother’s mantra so it felt like I was carrying her with me wherever I went. Maybe it means something entirely different to Max (I’m not going to assume what it means to him because that’s kind of weird to put other feelings and thoughts into someone else’s mental mouthpiece and/or brain). Our bandmates probably think of it as something else as well.

And after a year and some change of doing being a lead singer/front person, I feel like the meaning of Live Well changed for me as well. It’s a reminder of how Max asked me to make some music with him or, more accurately, have him fill out some of the songs I’ve already written. It reminds me of how I was initially weirded out with the idea of naming the band after something so deeply personal to me. It reminds me of how coincidental life can be. I mean, from my understanding, Max had talked to Matt (our former bandmate) at a party they both attended. And without Matt, we would have never met Luis Castro (our bassist). And we found our drummer, Neil Stafford a couple of steps away from Max’s bedroom since they’re roommates. It’s like all of these little pieces started to fall into place right when they were supposed to and I don’t think any of us could have planned for things to happen the way that they did.

But even after writing all of that, I’m still not sure what exactly Live Well means to me. It reminds me of my mother. It feels like the legacy I leave behind. I don’t really know how else to describe it. It’s a series of events that brought me here, to this place, aimlessly writing about what something means to me.

Ever thought of getting a “Neck Tattoo?” Check out another music video from Live Well:

You know what? Maybe it’s a vehicle. Not a physical vehicle like a train or a bus or a car but a metaphorical one. Live Well brought me to places I never thought I’d be in this lifetime. I got to share laughs and stages and drinks with people I look up to. I got the opportunity to affect people positively. I got to help friends of mine forget all the garbage going on in their lives for 30 to 40 minutes when they came out to a show. It’s a series of moments in my life (or maybe yours if you connect with any of the songs. I don’t know your life, so I can’t confidently say they’re also a part of your life.) that I cherish no matter how difficult they were at the time.

Or, maybe it isn’t any of that. Maybe I’m being a little too pretentious about my own band and what it means to me. I’m not sure, writing this, I feel like a word trying to define itself before going into a dictionary. I could mean a lot of things but what’s the best way to describe it? Who knows? The one thing I do know, though, is that Live Well is a group of goofballs from Yonkers who love one another, who want to foster a comfortable space in their community, and who can’t stop laughing once they get on a stage.