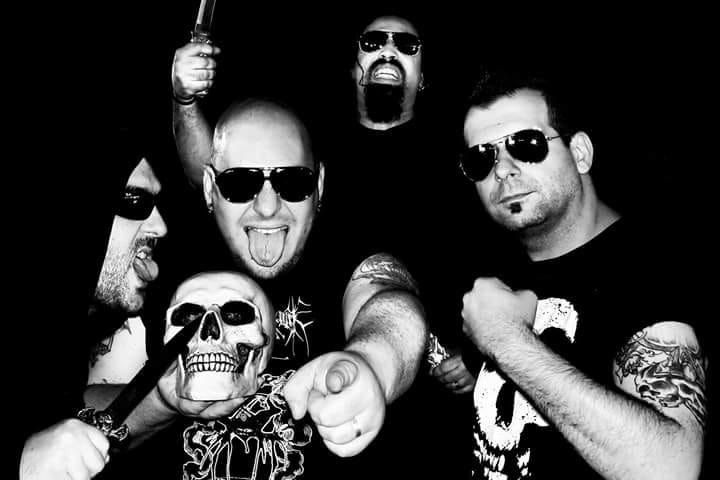 Hailing from Lisbon, Portugal, Martelo Negro is the culling of the musical dreams and tastes combined with the old-school worship and attitude of Simão “The Beyonder” Santos. The bassist and vocalist originally breathed life into his obsessions with Black Hammer, a one-man project that rehashed old-school thrash, death and black metal in the isolation of his bedroom for the sheer love of metal and the fact he’s long held the opinion that most anything that’s emerged since the early ‘90s is crap.

Santos has since taken the native Portuguese translation of his project’s original name and added guitarists Marco “Thamuz” Alagoa and José “Melkor” Marreiros and a rotating cast of drummers (Aarno Maalm played drums on a session basis) to make Martelo Negro a full band with three albums under its belt, including the recently released Parthenogenesis (out via Helldprod Records and available on Bandcamp) which is actually the second part of a planned trilogy of albums.

We caught up with “The Beyonder” for a discussion on looking forward by looking backward, how life gets in the way of metal, and how that’s not going to stop him from still being metal to the death.

What spawned the change that took you from doing Black Hammer as a one-man project to a full band as Martelo Negro?
The Beyonder: Well, basically, my need to have a real band and not another inconsequential bedroom project. Drum machines are obedient partners but they lack human substance.

Are you still a control freak who writes all the music or have you been able to let go of the reins and let the other members contribute?
The Beyonder: No, not really a control freak, as life itself taught me, sometimes in the most bitter ways possible, that we control absolutely nothing. I still write all the lyrics, though. All the instrumental side of our music, the riffs, arrangements, etc., is a collective product.

Is Parthenogenesis considered the second chapter of the original Antimateria trilogy? Or does the album stand on its own as a move forward, separated from the past?
The Beyonder: Indeed it is the second chapter of the aforementioned trilogy and it cannot be isolated from it. And, no, it is not a move forward, even though we play better now and our knowledge of things is wider. I would say Parthenogenesis is a refined version of what we have always done, not a move forward in terms of innovation or something like that. Innovation is abomination!

What’s been going with the band and/or in your lives to account for the five-year gap since (previous album) Equinocio Espectral?
The Beyonder: Well, after the promotional cycle of Equinócio Espectral, we took some time off in order to write and record this new album. The mixing process was absolute hell. We also had some internal turmoil as the lives of some of us in the band were absolute chaos. In the meantime, I became a father and had to, and still do, focus on this new condition of being a family man.

You played Portugal’s SWR Barroselas Festival in 2014 when the band was in a state of flux and are playing it again this year with a new album in tow. How significant of a role has the festival played in the rebirth and ongoing survival of the band?
The Beyonder: The survival of the band has never depended on festivals, no matter how huge or important they can be. We are a band driven by the need to write and record music, playing it live or not is a mere detail. Still, we appreciate the exposure we get when we play at SWR, as our 2014 performance there was a quintessential mark on our ten year career as a band.

The album Parthenogenesis was just released on April 17th, via Necrosymphonic Entertainment. 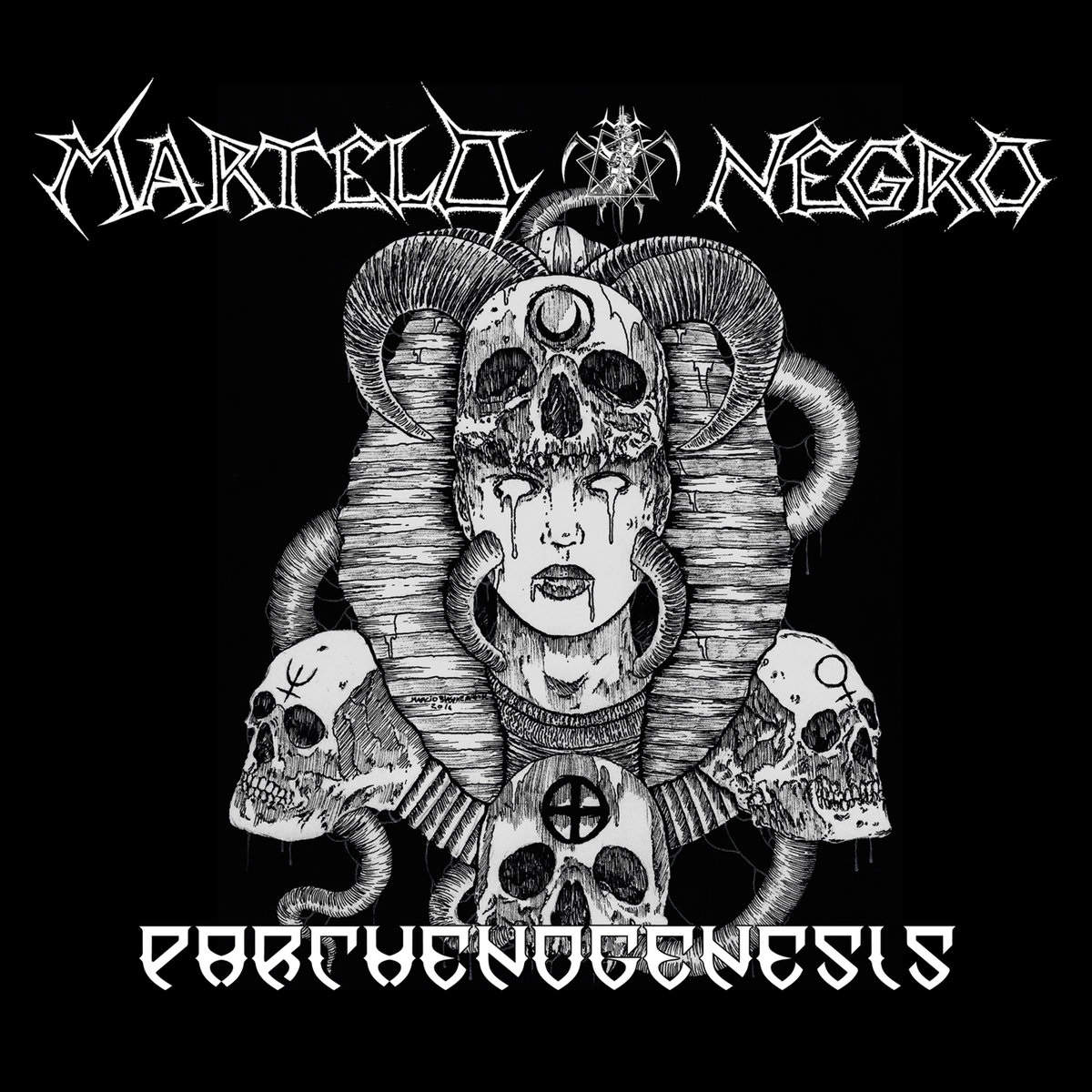 How long did it take to write Parthenogenesis and what would you say kick-started the writing of the new album? Was there a particular point where you had enough material that was strong enough to settle on a direction for the record? Or did you write the album on a song by song basis?
The Beyonder: We wrote just about twenty songs in a couple of months and selected those that would fit the artistic direction we were pursuing at that period. Myself, Thamuz and Melkor are quite a team when it comes to writing new songs, we have our own internal criteria which makes things easy and we work in a fast and accurate way.

Was there anything that was done differently in terms of the way the new album was recorded than what you had done in the past?
The Beyonder: The drums! Our drummer played a v-drum on the previous record, which facilitated a few things for us back in 2014 when we were on a very low budget, but it really never sounded like real drums. This time an appropriate drum kit was used and it fuckin’ sounds like it!

What is the significance or story behind the album’s title?
The Beyonder: Originally, the album’s title was supposed to be ‘Solstício Funerário.’ In the end, it just felt wrong because it is the title of the weakest song of the album, in my opinion (sorry, Melkor!). There was also a personal superstitious reason for changing it to Parthenogenesis, but I will not get into details. Parthenogenesis is a natural form of asexual reproduction in which growth and development of embryos occur without fertilization. Therefore, the immaculate conception of Jesus Christ! Science, myth, manipulation and power hand in hand! How cancerous can religion really be?

How would you characterize Parthenogenesis against your previous two records? Does either the new material or production of the album seem drastically different to you from the past?
The Beyonder: I think it pretty much sounds like Martelo Negro! The new material itself has new dynamics that we didn’t explore extensively in the previous albums but already existed. Production-wise, I truly believe this new album sounds better than anything else we have done prior to it. And, trust me, there is a lot of hard work behind it.

Okay, okay… you can stream (and purchase) the entirety of Parthenogenis right here.

As you’ve gone forward with Martelo Negro, have your goals or direction changed? How has your intent changed when you compare now to what it was like when you formed the band?
The Beyonder: No, sir. The artistic purpose of Martelo Negro remains the same. When I started Black Hammer in 2006, I wanted to play what most people considered to be obsolete cavernous metal. In 2019, I still want to play obsolete cavernous metal and will continue to do so until the day that I die. I can say that the music Martelo Negro plays now is a refined version of what I used to play alone, in my bedroom, back in the day. If someday I will stop listening to old Sodom, Hellhammer/Celtic Frost, Possessed, Sarcófago, Bathory, Iron Maiden, Venom, Decayed and Filii Nigrantium Infernalium, Martelo Negro will cease to exist.

Your bio makes claims that “nobody gets realer” than your band and that MN is “the enema the underground scene needs.” What can you say you’ve done or accomplished that allows you to stake that claim?
The Beyonder: I would like to answer that but those magnificent words are not ours. For promotional reasons, they were added to our bio. But even though they might make us look or sound pretentious, I can honestly say that we are real because we are in it for the right reasons. We exist for the sole purpose of playing good, old-school metal with no traces of modern mediocrity, as we believe modern metal is pure crap! There are exceptions, of course, but most of it is pure artistic prostitution driven by the mediocre desire of getting (a) “thumbs up” in social networking. FUCK THIS MODERN WORLD MADE OF SUBHUMAN CREATURES CLINGING TO THEIR SMARTPHONES!

Yourself and Melkor both have an extensive list of past and present bands hailing from a variety of subgenres. What would you say is different about what Martelo Negro offers you that your other bands and projects don’t?
The Beyonder: Most of my side projects are now defunct because my current full-time bands (Martelo Negro and Namek) fulfill me artistically and aesthetically, which was not the case with my other bands/side projects. As we get older, we become wiser and more pragmatic, so we get rid of all that is superfluous. Most of my side projects/bands were superfluous, superficial and not driven in the right direction. Martelo Negro (and Namek) offer me the intensity I have always pursued, therefore I need nothing else, at least for now!

Check out the lyric video for “Culto Hermetico” released all the way back in 2014.

Is there a difference in the reaction of younger and older metal fans to Martelo Negro?
The Beyonder: That is something I don’t really pay attention to. But I can tell you that I’ve seen younger metal fans impressed with our music and I’ve also seen old metal heads unimpressed about it! In the end, we play the music we enjoy ourselves, not really caring about who is going to enjoy it! It’s nice when people enjoy it; it is flattering, of course. Still, we do it for the sake of our own personal fulfillment.

In the pictures of the band that I’ve found, it would appear that exaggerated mugging for the camera is a pastime you seem to enjoy. For some, this might bring up questions about how serious you are, how “cult” you are, how “true” you are. Do you care about any of this and how people interpret what you do?
The Beyonder: No, we don’t care about any of that, we are what we are and what you see in pictures is very close to reality, even if they make us look like the assholes we are. Even though we are all in our late 30s, early 40s, we are still the same chaotic suburban kids we were 30 years ago when we got into metal. I guess the pictures reflect that. And, no, we really don’t care how people interpret what we do. As far as I am concerned, real heavy metal is chaos, violence and fun, yes, humour is important and a band’s image should reflect that.

Do you have a plan for what’s going to happen once the album is out? Touring? Festivals? Getting away from Portugal to new places in other parts of the world?
The Beyonder: Getting away from Portugal would be nice, yes, but we can’t do extensive tours due to professional and family-related reasons. We all have 9-to-5 jobs we must keep in order to put food on our tables. As for festivals, we want to play wherever we can play and then close the cycle, so we can write new material! Ouroboros awaits!