Check out the song: “Being For The Benefit Of Mr. Kite”

I recently had the good fortune to speak with guitarist Andy Timmons about his new record, Andy Timmons Band Plays Sgt. Pepper. Timmons has had a long and prolific career, beginning with the ‘popular ’80s band Danger Danger he then went on to form the Andy Timmons Band and has he played with a wide range of notable musicians well. For this project Timmons reworked the classic Beatles album as an instrumental, with quite stunning results. Here is what he had to say about the new CD and his longevity in the music business.

Now that your new record, Andy Timmons Band Plays Sgt. Pepper is complete. How do you feel about it and are you satisfied with the outcome?
Andy: Yeah for sure. Certainly it was a labor of love for me because I spent a couple of years working on the arrangements. I wasn’t planning on making this record it was just sort of a challenge for myself to see if I could play this material all by myself. We had been doing a version of “Strawberry Fields Forever” live on a couple of tours and it was going over really well. A promoter over in Italy suggested the next time we came over we should play a whole set of Beatles tunes. My initial reaction was that it would not be possible with the instrumental power trio thing we are. How could I keep this material interesting and pull it off in a live context? But it kind of got my wheels turning and as I was writing new material for a record I began playing around with different versions of Beatles songs fleshing them out by myself covering all of the melodies and every little aspect of the songs as I remembered them in my head. More and more I started picking songs from the Sgt. Pepper record and it became kind of a cool hobby. Before I knew it I realized that they were really sounding good and I was enjoying it and I was able to do the whole album by myself. We were actually in the studio recording music with the Andy Timmons Band and at the end of the session a couple of days became available and we literally, in the course of about two and a half days, recorded all the tracks. I ended up redoing about half of the guitar tracks just to better the performances but it all happened fairly quickly once we decided to do it.

I know they are all Beatles songs and I know they are all great but do you have a favorite on the record?
Andy: I do like them all but I think my favorite would be “Within You, Without You” that was a bit of a challenge for me especially the Indian/Middle Eastern section with the sitar. I also like “She’s Leaving Home” the Paul McCartney ballad. It was always kind of a favorite but later in life for me. When you are a kid it is not the one you are drawn to because there are no loud guitars and drums but later on in life you start to realize the emotional content and how sentimental the song really is. I was really just trying to achieve the emotional content that Paul got with the harp and the string quartet. 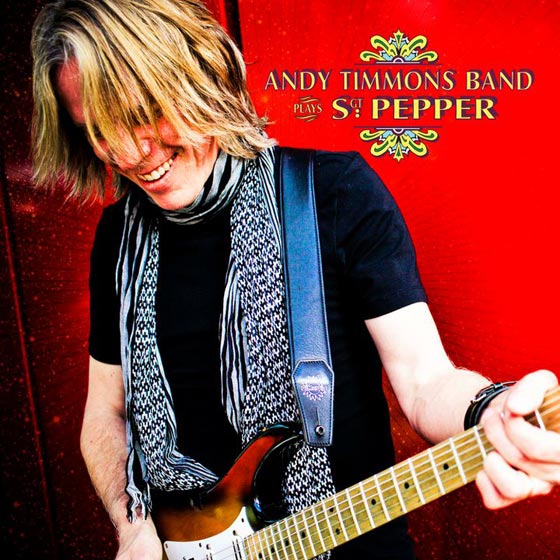 Are you planning on doing anything live with this project?
Andy: Yeah we just did a couple of weeks over in Italy and we were playing about half the record live. We had just released the record and I didn’t want to start hitting everybody over the head with the record all at once. Once the record has been out for a while we will do some touring where we do the entire record and then maybe the second set we will do some of our other material. I am really excited about going out and playing the whole thing live, I think that is going to be a lot of fun.

What has the response been so far?
Andy: It has been incredible; it has been going over really well with all the industry folks I have sent it to personally and all the press so I am really happy with that. I wasn’t really concerned with that at the beginning, I was just doing it because of was fun, but now that the response has been so great it is kind of like the icing on the cake.

I have been a fan since the early days of Danger Danger maybe 25 or 30 years ago. Did you ever think you would be still doing this after so long?
Andy: Absolutely! I never had any desire or idea to do anything else. I don’t know how to do anything else. Being in a band like Danger Danger was not necessarily my career goal, it was part of the goal for sure but really the master goal was to always be playing and improving as a musician. I started off as a straight rock player playing stuff like Kiss and Ted Nugent but by the time I joined Danger Danger I had already gone down a different path into the jazz/fusion world; I wanted to be in Miles Davis’s band. I just want to keep working and doing what I am doing. I am so blessed to be able to make my living doing this. No complaints, as tough and as challenging as it is to be a full time musician I never take it for granted.

The music business has definitely changed dramatically in the last 25 years and it is really cool that you are still able to make a living doing what you enjoy.
Andy: Yeah but it kind of seems to be getting better and better as far as my career goes. The level of exposure with the internet is amazing. You don’t have to have a major label behind you and you don’t have to have deep pockets financially to promote because if what you are doing has substance and value people are going to find it. I have not put anything on the internet myself yet it has all just been random folks putting videos up and some of these things have a million views, it is crazy. This is the MTV of today, radio is almost non-existent and everything is internet based. The game has changed drastically but I keep up with it enough because I have to make a living and pay the bills. I have found over the years that anytime I made any decisions in my career based on money it was never the right choice, especially if it deviated from what I knew in my heart was the right choice. I really found that if I just do what I love to do everything just turns out great. That is what happened with this record, it was not about financial gain, it is turning out to be that but it is not why I did it.

I think sometimes when you do stuff like that it works better all-around because you feel better about yourself and people get it. They know when it is honest.
Andy: I think so. People know when it is real and when it is bullshit and today there is just no room for that. You just got to do what you love and that’s the bottom line.