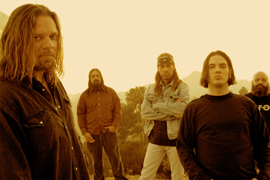 Down: “Over The Under” CD Giveaway

Brief Bio: I don’t know if anyone remembers there’s a war going on in Iraq, but there’s a war going on here on the home front, in your head, with late night reconnaissance missions called “Temptation’s Wings” and “Losing All”. The southern hemisphere, primarily New Orleans, has much to offer by way of paralyzing roots music these days. In these dark times of cookie cutter paint-by-numbers wastes of recording contracts, an air of originality unseen anywhere else lives below the Mason-Dixon line. This is post-Katrina New Orleans. Through the wreckage and wretchedness, the third Down-Over The Under is poised fanatically on the edge. – Mike IX  [ END ]

Prizing:
ONE (1) wicked lucky Down fan will win a FREE copy of their smoking CD, Over The Under. You’ve got to enter to win though…