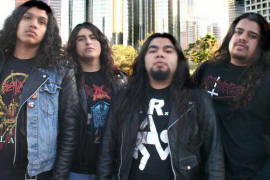 If you’ve been following the metal scene for the past few years, there is no doubt that you are familiar with the 80’s thrash renaissance. Legions of young bands from one side of the world to the other have pledged their allegiance to the groups who ruled the underground circa 1988. These new bands have more in common with Flotsam & Jetsam and Death Angel than they do with Disturbed or even, Every Time I Die. Every new thrash band that springs up, provide new material packed with the kinds of riffs that incite circle-pits and total headbanging mania!

Not only do these younger acts embrace the aggressive rhythms, non-growling vocal style and hyper-speed solos of the bands that came before them, they’ve also adopted the look. If you go check out one of the current thrash bands live, you’ll see plenty of Reebok hi-tops, denim vests and Overkill t-shirts! L.A.’s Fueled By Fire are one of the pioneers of this new wave. Their Exodus-flavored Spread the Fire album encapsulates everything that made thrash metal so potent in the first place. PureGrainAudio contributor, Carlos Ramirez had a chance to talk to Fueled By Fire drummer, Carlos (no last name given) about the scene, their album and their experiences playing shows with their heroes.

Your sound is obviously influenced by the great thrash bands of the mid to late 80’s. How did a young band like you get into Vio-lence, Forbidden, and Sacred Reich?
Carlos: Well, we were first into the old school Heavy Metal like Iron Maiden, Armored Saint, Dio, and Judas Priest. We then heard Exodus, Testament, Slayer, Megadeth, and they were faster so we started to check out more and more Thrash bands. From there we came upon Vio-lence, Forbidden, and Sacred Reich a little later. I guess you can say you just keep looking for metal that is the style you like and from there you just find all kinds of shit!

I love the photo collage in the CD booklet! It reminded me of the ones in records by Necrophagia, SOD, and Devastation.
Carlos: Thanx! Yeah, we wanted it to look like an old school thrash collage, we were going all the way old school on this album, not just the music, but every aspect man!

There is a thrash renaissance right now but was it tough in the beginning to find like-minded bands to play shows with?
Carlos: Yeah man, it was real hard to find bands to play with, that was our style, when we started we played traditional Heavy Metal, and we were playing backyards here in Norwalk where we’re from, and we were playing to nothing but punks and playing with punk bands that didn’t like us. What was cool was when we played an Iron Maiden cover they actually went crazy! But now all those guys respect us for what we’ve done and the music went on to play! But back then we started playing clubs like the Whisky a Go-Go where we were always booked with some poser nu-metal band, some gay ass hardcore band, or some fucking weird ass emo/electronic bullshit. We ended up just playing to our friends that we invited. Haha! I guess you can say we’ve come a long way!

How much of the resurgence feels “real” to you? Merciless Death, Violator and handful of others definitely seem authentic. Which of these newer bands are you into at the moment?
Carlos: Well the first time we played an all thrash show was with Merciless Death @ the Cobalt Cafe in Canoga Park, CA which was on August 24, 2005 with some other local bands called Metal, Scarred, and Meiven. None of those bands are around anymore, but after that first time us and Merciless Death played together we appreciated each others music and we’ve played shows together ever since. Together, we brought up the thrash scene here in California along with a couple other bands! We all love Merciless Death’s music but Violator is a fucking kickass band, personally I think they’re the best thrash band out there from this generation!

I’ve read that you got some tips from Joey Vera (Armored Saint and former Anthrax bassist) when he was remixing Spread the Fire for re-release. What kind of stuff did you go over with him?
Carlos: Well we never got any tips from him really. We talked about a lot of things but it really wasn’t advice. It was more like, “Hey have you ever played in Japan? How was it? Are they fucking crazy out there? What’s the biggest crowed Armored Saint played to?” you know what I mean. But Neil Turbin (former Anthrax vocalist) told us to always go with what feels best and to give the crowed our best show possible. He’s been a good friend to us and given some great advice. He’s also a very funny guy!

The drum performances on the album are really impressive. Who were some of the drummers that informed your playing early on?
Carlos: Why thank you! Well, my main influences early on were Nicko McBrain and Bill Ward. They were my absolute favorites, but now I have many more influences such as Igor Cavalera (Sepultura), Gene Hoglan (Dark Angel, Strapping Young Lad), Perry Strickland (Vio-lence) and Paul Bostaph of Forbidden and Slayer. Those drummers influence my style a lot these days.

Here in Los Angeles, there is a huge Hispanic metal fan base. What do you attribute that to? What about metal do you think draws so many Latino kids?
Carlos: Well here in L.A. there’s the majority of kids seem to be Latino. They just want to here some good music and what better than metal! They either hear it through a family member or just get into it because their friends get them into it, or whatever. I know I got into heavy metal through an old friend!

You’ve opened for many veteran acts in the last year. How have they treated you and have you gotten any advice?
Carlos: When we opened up for Agent Steel it was a great experience! They are good friends of the band now, especially Juan Garcia. He really likes our music and gives us all of his support whichever way he can! When we opened for Exodus at the Showcase Theater in Corona, CA, they watched our whole set from the stairs leading up to the backstage area. Rob (Dukes, Exodus’ singer) even recorded us on his camera because they were filming some DVD. After that, Gary Holt and the Rob came up to us and said we kicked ass and that we really did our old school thrash homework! That was a fucking honor!

The lyrics on a few cuts on the album deal with metal and your dedication to it. What kinds of things are you planning on getting into, thematically on the next record?
Carlos: Well, we really don’t plan on those kinds of things too much in advance. We just make the song and whatever feeling we get from it, we take it from there. Some of the subjects we will tackle on the songs we have for the next album are atomic warfare, getting possessed, mistreatment from mental institutions, and some other heavy stuff!

Bands like Testament (“The Ballad”) and Metal Church (“Anthems to the Estranged”) had some “ballady” kinds of songs on later albums. Can you see FBF ever doing something like that?
Carlos: No, we’re drifting farther from that stuff. We’re actually getting heavier and faster! So I don’t think you’ll be hearing anything like that on any FBF album anytime soon…haha! Who knows, maybe in like 10 years from now when we feel it’s time to sell out like Metallica, cut our hair and wear slacks on stage! Haha! Just kidding, fuck that! If we start heading in that direction, I hope someone will kick us in the ass!!

When can fans expect a full length North American tour? And are you going to be playing one of your infamous old-school metal covers?
Carlos: You can expect a full U.S. tour in late May. We’ll be playing stuff from Spread the Fire and some newer songs but I don’t think we’ll do a cover. We’re out there touring our own music not anyone else’s! That’s what the fans are there for and I’m sure all the old school bands know about the new thrash scene that is happening now. They’ll all reform pretty soon anyway! Thanx for the interview! I hope this is what you were looking for! KEEP THRASHING!!! And to everyone who read this, if you don’t have our album Spread the Fire yet, go out and pick up your copy and TURN UP THE VOLUME! You won’t be disappointed!  [ END ]