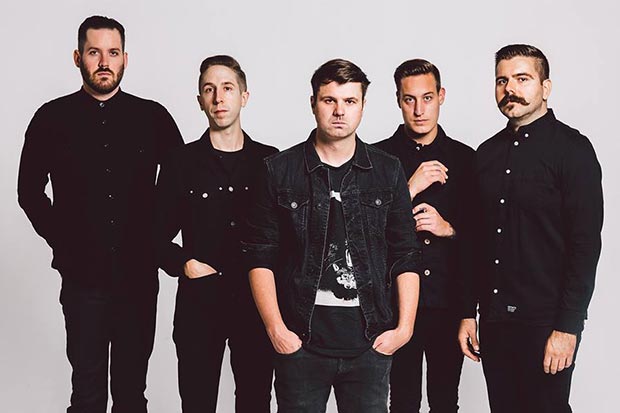 I was able to catch up with Silverstein guitarist Josh Bradford just prior to the band getting onstage for their headlining date at a sold-out Kool Haus in Toronto, ON. In fact, the entire Canadian leg of the tour featuring Protest the Hero, illScarlett, and The Devil Wears Prada had capacity crowds. We talk in the band’s tour room while illScarlett plays to a seemingly hyped crowd. Josh is very welcoming, and all smiles. Thanks go to him, the band’s tour manager Shawn, and my homie Shelby at Victory Records for their hospitality. Read my thoughts on the night here.

You guys have done some extensive touring since the days of When Broken Is Easily Fixed that kind of prevents you from coming back home as much as you used to when I first started coming to your shows. How does it feel to be back home?
Josh: It’s amazing to be home. It’s nice to be playing a couple of shows around home, too. We played London last night, so we had the chance to drive home and sleep in our beds again, so it’s pretty cool. What else… after this, we play Montreal, Quebec City, and then we get to come home for 10 days for a nice break, which should let us enjoy what we do that much more, you know?

This tour carries a really diverse line-up (Silverstein, Protest the Hero, illScarlett, The Devil Wears Prada). Three Canadian — acts, really different bands. What are your thoughts on the tour from a musical standpoint, and how do you think this tour represents what’s happening in the Canadian music scene?
Josh: It’s been going amazing so far. We weren’t sure what to think of it. Touring with bands like Protest the Hero and The Devil Wears Prada – we’ve done that before, and we enjoy it a lot. It works for us – it’s a little bit heavier than what we do, but we do incorporate some heavier elements so it seems to work out. We haven’t really ever toured with a band that plays ska or reggae (illScarlett) and so it’s actually really rad. I’m a big fan of ska and reggae personally, so it’s really refreshing for me. It’s been going over really well. It doesn’t seem to matter that there’s metal kids, hardcore kids, emo kids, ska kids, and punk kids at the same show. Everybody seems to be getting along really well and just having fun embracing that diversity, which I think is very indicative of the Canadian scene in general – so many talented artists playing so many different types of music that it’s amazing. I’m very proud to be a part of it.

Absolutely. Now I know it’s been awhile, but are you happy with the response to Arrivals and Departures so far?
Josh: Yeah, it’s been great. We put a lot of hard work into it, and we’re really proud of it, and everybody that picks it up seems to get that about it, and gets as stoked about it as we are, so it’s been good. I hope it keeps up so that we can just keep touring.

How’s the reception been down in the States?
Josh: It’s been great. The industry, as I’m sure you know, is in a weird spot right now…

Sure.
Josh: Like, record sales as a whole are down hugely – I think the number one record in the States last week only sold shy of 60,000 copies which is like… not really anything compared to what used to happen, so it’s been going great, especially considering the state of the industry. It could be better, but all that really matters is that we get to play shows and have people come and enjoy that with us.

You have three well-received releases under your belts. How do you go about choosing setlists now for shows like this one?
Josh: We’ve been trying to do a really good mix of all three records. We obviously are really stoked on the new stuff, so we’re playing a lot of it because it’s fresh for us and it’s fun, but we’re trying to do, like I said, a really solid mix – a lot from the last record, and a lot from the first record. As much as possible, really. Tonight, I think we’ve got at least three from the first record… three or four? We’re just trying to mix it up, you know? Because there are some people who come to the shows who like the first record the best, and some people who don’t know the first two records – they’ve only gotten into us since this latest one, so we’re trying to keep everybody happy while keeping ourselves entertained as well.

I’d say there’s a sharp maturing in the songwriting, probably most notably between the first record and Discovering the Waterfront. Tell me a little about approaches you took to Arrivals and Departures that you think might have advanced and sharpened those skills even further.
Josh: We’ve just been through that process so many times now that we know what to expect form it, so there aren’t any surprises anymore. We’ve worked with producers who’ve been like, “in this song, you need to trim the fat away and get to the point of this part,” if there’s a part that’s a little excessive. So we’ve kind of honed our songwriting skills so that we can self-edit really well. We just have the whole process figured out really well, so not a whole lot has changed. We just lock ourselves in a room and just jam for a while on parts that we’ve come up with and try to put them together, but it’s that self-editing where we say “we should get to that chorus a little quicker here, or we should repeat that chorus here,” because you want to have people singing along. So from playing live shows and knowing what kids like and what seems to work, and recording so many times, it’s kind of like a science now.

How do you feel your relationship with Victory (Records) has changed the band both musically and from a business standpoint? Not to demonize Victory, but for a label with that magnitude…
Josh: It’s been amazing being with an independent label, but one of the biggest independent labels, that has some weight to throw around. I think they’ve taken us places we never would have reached on our own, or never would’ve reached with a lot of other labels, but at the same time, in certain ways, they’ve help us back. I’m sure you’ve heard stories. It’s a hard relationship, but they work hard and we work hard, so it ends up working out in the end. Without saying too much…

…but well. They market very well. How do you think that promotion has fared in terms of Silverstein?
Josh: They’ve done a lot for us. Like I said, when we have a new record out, they push it hard. Sometimes you’d like to see a bit more of…. It’s not like a sprint, it’s a marathon, so it’d be nice to see a bit more push on the record after it’s been out awhile, you know? They do things like re-releases, which is great, but it’d be nice to see more consistent advertising instead of, like, eight commercials back to back in the same hour. That annoys people – it doesn’t make them want to buy it, you know? But they do what they do, and they do it the way that they do it because it seems to have worked for them, so… I don’t know enough about the business side of it to really comment to heavily, so…. [laughs]

[laughs] That’s cool. Looking back on your catologue now, starting with some of the material that appeared on 16 Candles, what are your thoughts on the process that brought you to the point you’re at now?
Josh: It’s… been fun. [laughs] I don’t know. It’s been really slow, gradual steps along the way, so you don’t really notice until you look back and see how far you’ve come. Because every step of the way has just been a slight little increase on a slow climb, so… you step back from it and say: “We’re playing at the Kool Haus tonight, and we’re headlining.” Like, I used to come here when I was 14 and see bands, just freaking out….

Congratulations, by the way, on that account…
Josh: Thank you! Like, this is my dream right here. This is where I first started seeing bigger concerts, so it’s amazing to be on the other side of that now.

Last one… what’s going to be happening over the summer and the near future for the band, and what would you ideally like to see happen with the band over a longer span?
Josh: We’re going to take April off after we tour the States. It’s going to be nice to have a whole month off – it’s been awhile. And then, we’re talking about going back to Europe in May, doing some festivals and stuff over there. And then I think we’re talking about coming back for some time off in early June, before we go out and do something this summer… I’m not sure what yet….

Warped?
Josh: I’m not sure. There’s always a possibility, but I’m not sure yet at this point. We’re going to do some touring this summer in the States, a bit in Canada – something like Warped Tour, but maybe not Warped Tour…. We’ll see. Then we’re talking about getting back into the studio and making another record maybe late summer, early fall.

Right On…
Josh: Yeah, we want to get working on that right away. I’m excited about that.