The energy, the intensity, the brutality, the savagery, the bloodthirstiness… It’s all present (and then some) in We’re Wolves’ latest music video for “Life of a Parasite.” Off of their latest record Evil Things, this song is your quintessential hard rock banger, and the video clip really emphasizes this, as you bear witness to the band members and the crowd engulfing themselves within all of the pent up emotion.

The video was shot live on location at Kraken Music Festival, which took place earlier this year in Orlando, Florida, headlined by The Used and Story of the Year. Along with the performance shots of the members of We’re Wolves pulverizing the crowd, there are also snippets of exclusive backstage footage as well as the meet and greet that took place between the band and their fans.

In regards to the video, lead singer AJ Diaferio tells us:

“We got the opportunity to open for our heroes at Kraken Music Fest this year; bands that heavily influenced us in our early development into rock. Obviously, we decided to capitalize on this and make a music video.

“Although the lyrical content of this song is directed at toxic friendships, we thought the energy of this song fit the vibe of a festival atmosphere. We wanted the opportunity to thank our loyal fanbase who showed up early in droves to see us, in their We’re Wolves t-shirts. I think this music video, shot by Arthur Lucena and Michael O’Malley, really captures the essence of our band and what we’re about.”

Evil Things is We’re Wolves’ proper, full-length debut record, a group of songs meant to connect with that dark side that exists in all of us. The album is based on Dantey’s Divine Comedy, the 14th-century medieval poem written by Dante Alighieri which explores ideas of the afterlife in medieval Christianity. It’s widely considered one of the greatest pieces of global literature of all time, and its focus on Hell and purgatory made it ideal subject matter for a band like this to further explore.

Evil Things takes you on a sonic journey through the depths of Hell that’s particularly engaging to listeners who appreciate both metal and horror fiction. With guest spots from Fame On Fire’s Bryan Kuznitz and Spencer Charnas of Ice Nine Kills, We’re Wolves have established themselves as the world’s most exciting new horror rockers, here and ready to take you on a ghastly trip through the bowels of the underworld. 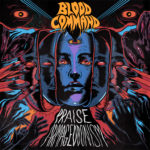