First off, let’s just get something out of the way: Norway rocks. Sitting on an oil reserve for decades and then using the profits of that to craft a socialist’s wet dream for all of its citizens while said populace goes about creating their most nihilistic, self-aware, intelligent art is my ultimate idea of an absolute win. Objectively speaking, having a hyper-educated people with access to all the resources necessary for creating their perspective of a world around them (one that, thanks to geography, is steeped in ice and darkness half the year) has yielded some of the most compelling, grim and dark creative endeavours this world has seen.

This leads me to Black Void, the alter ego to the band’s decidedly more melodic/softer counterpart, White Void. In the same vein as Iskra, Martyrdod and Ictus, Black Void’s take on the blackened crust meld of black metal and crust punk is a refined entry that earns their new album Antithesis its moniker. It’s a hideous rejection of all things resembling hope, diving headlong from an optimistic vantage point into the whirling black hole of despair – all in downbeat.

It’s a testament to the band’s ability to manoeuvre around the weighty lyrical material with sonic ease that this record is worth noting among the long line of d-beat/blackened crust hybrids that have made their mark over the last four decades. “Reject Everything,” in particular, captures the frantic, monochromatic energy of violent outbursts coupled with putrid philosophy, while also managing to be their foremost frenetic single.

Overall, the album continues at a relentless pace, which for some might be same-y, but for genre fans just means less skits (read: bullshit) and more time dedicated to the mess of noise. As well, the lyrical content matches the rage with despair: “Earth has no special place among the stars. Bring us back, bring us back wherever we go. There is no god from which morality can grow. (We’re) evolutionary products, our progress is slow.” It’s this ability to distil down the madness of existence into these types of lines that, if uncommon, would be impressive alone. But this whole record is wall to wall with them, elevating the album’s lyrical, vocal, rhythmic, and melodic delivery to a different level.

1. Void
2. Reject Everything
3. Death To Morality
4. Tenebrism Of Life
5. No Right, No Wrong
6. It’s Not Surgery, It’s A Knife Fight
7. Explode Into Nothingness
8. Nihil
9. Dadaist Disgust 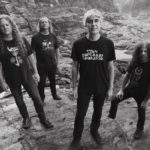