Truth be told, it was a total one-eighty. That darn duo, The Dollyrots, had been flaunting their decadent lifestyles for decades — especially the weird-looking one. As a result, frontchick/bassist Kelly Ogden and guitarist Luis Cabezas had been finding themselves atop the “naughty” list consistently, year after year.

However, seemingly in an effort to suck up to the “big guy” in 2020, they released A Very Dollyrots Christmas — a legit, full-length yuletide collection. Clearly now in cahoots with Kris Kringle, the Dollys returned from the ol’ workshop recently and dropped “One More Sleep” — an irresistible new holiday single that’s warming cockles currently from coast to coast.

“Most really great Christmas songs are guilty pleasures,” confesses Ogden. “And ‘No More Sleep’ is a guilty pleasure that we felt was begging for a big rock treatment.”

“It’s got that ’60s girl group vibe nailed,” says  Cabezas — “which is something that comes super-natural to our band. So we took the Leona Lewis original and added our loud guitars, big choruses and tons of merry happiness!”

The result is a must-hear stocking stuffer, for sure — driven by Cabezas’ full-throttle riffs, beefed-up by Ogden’s throaty chug and glossed by her sugar cookie vocals. Add to the mix, a lil’ rib-cracking drum work and some snowy-sounding sleigh bells, and you’ve got a Christmas treasure so authentic, you can (almost) taste the eggnog oozing from your earbuds. That’s an endorsement, by the way. 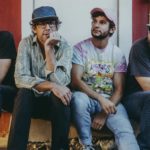