If you miss Britpop music, and maybe the LSD, but not the warring bands challenging each other to fistfights, then Lapels will surely be up your Manchester alley. Completed unabashed in their admiration for the last great era of British rock music, the band is happy to unveil their new music video for “All Things Down To You.” This also happens to be their first-ever music video, a well-shot, no-nonsense performance clip that’s reminiscent of the types of videos that used to be all over television in the 1990s.

The band recently signed to Marquee Records in England, the first new young group signed to the iconic label. This is the follow-up single to their debut “Warning Lights,” a more mature-sounding track than its predecessor that discusses the momentum and desire necessary to go out there and grab your dreams.

With some words on the new single, Andy Lewis said,

“There’s a big dollop of irony in our new single ‘All Thing Down To You,’ because whilst writing it, I realized that I was telling people to get off their arses and manage their own lives, but I found that I couldn’t finish writing the song lyrics without our Nathan. I had these lyrics whirring round and round in my head, as if I was screaming to people to get on and take charge of their own business, but it wasn’t translating into a full track. I packed my bags and went over to Nathan’s house for a couple of nights, and suddenly it all fell into place.

There’s this strange songwriting chemistry between the two of us that we just can’t explain, we just seem to vibe off each other during that songwriting process. So yeah, I’d say all things in life are down to you to succeed with, but sometimes you need your right-hand-man to make that happen. Two heads better than one. I guess it’s just down to each one of us to find our perfect partner to make that happen.”

Rightly or wrongly, local music media have already been doling out the comparisons between Lapels and Britpop icons like Oasis and The Verve. The comparisons though are certainly not a stretch, with the similarities clear and the qualities undeniable. “Warning Lights” has a very clear Oasis influence within it and lead singer Nathan Pointon sounds like he could be Liam Gallagher’s long-lost son.  That song was given a low-level release by the record label, but yet it began to pick up steam and the buzz was rapidly growing for this East Midlands quartet.

There’s an obvious need and demand for a new generation of British-based guitar rock music, and Lapels couldn’t be more excited to answer that call. 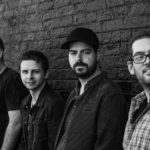