It’s all about maturation with 7th Grade Girl Fight’s new offering, their self-titled debut full-length album. Raising the bar set by their first two EPs, the album showcases a more polished, refined version of the band, one that really sounds like they are fully aware of the musical space within which they want to navigate!

Defined by its burgeoning energy and addictive choruses, the album was made patiently, in part thanks to the time afforded to them by this wretched, never-ending pandemic. It came, though, as somewhat of a blessing in disguise, as it allowed them the time to focus and experiment without having to worry about getting back out on the road and getting to the next gig in time.

“Our record is like a plane ride: it races you down the runway, launches you into the air, finds cruising altitude, serves you a cold drink and a colourful sunset, and safely lands you back on earth. We made this record with patience and intention, showcasing our songs laden with melodic hooks and walls of sound. Our lyrical landscape encompasses clever, poignant lyrics: the relationship could’ve beens in the lead off smokin’ rocker, ‘A Little Closer,’ life do-overs in the high-energy ‘Pull It Together,’ poppy, snarky social commentary in ‘Better Luck,’ and grief processing shoegaze in the album’s final track, ‘December.’

“Each member’s musicianship shines throughout every tune, recorded with an ear to how it served the song. Unlike our first two EPs, which captured our live performances and energy, this record features the talent and maturity of the band, delivering songs that get stuck inside your head, and a desire to restart from the beginning after the last track.”

The band members assembled in late 2020 to begin pre-production on a full-length album. They began recording with producer and engineer James McLaughlin in their hometown of Charlottesville, Virginia where they laid down the studio drum and bass tracks. Many of the vocal and guitar parts were recorded at home, which afforded more time to explore without the pressure of deadlines and studio fees. Lead singer Debra Guy wanted to assess what she felt worked for herself and the band without feeling like she was wasting anyone’s time. The result is a satisfying and gritty debut, bringing the genres of indie rock, garage rock, and pop-punk together with sharp, relatable lyrics, revealing a band that is a more evolved version of itself.

‘The Sabbath Sessions’ Launch with Acoustic Performance from Malevolence, Sylosis and Tesseract 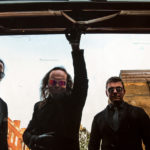