There is no one way street to success. We all take different and divergent paths to where we end up; the very case when it comes to folk group The Booklights. Not just exceptionally talented musicians, each member of the band is also an actor, with many Broadway and stage credits to their names. Formed in 2014 by lead singer Rob Morrison, The Booklights have developed their own type of progressive Americana, featuring lots of classic vocal harmonies that conjure up memories of some of the great folk and psychedelic artists of the late 1960s and early 1970s.

It’s taken several years, but it was certainly worth the wait, with the recent release of The Booklights’ debut EP Into a Ball. The album was recorded remotely last year while in the thick of the pandemic and it features a real rootsy sound that incorporates all of the genres of music that the members love. Its five tracks also show a lot of versatility, made possible by Morrison’s impressive musical cohorts, cellist Lauren Molina, fiddler Rachel Green, and percussionist Benny Elleridge.

It’s rare that a group of musicians is also a group of actors, so the members of The Booklights were kind enough to contribute for us a special guest blog in which they discuss their histories and careers as actors, and also how the worlds of acting and music collide.

Rob Morrison: “For me, the worlds of music and performance have been intertwined — even tangled — since the beginning. I feel like I was always interested in doing both. I played saxophone from elementary school through high school, at the same time that I was doing theater at great places like Flat Rock Playhouse. I went to Emerson College for musical theater, and moved to New York City afterwards. And I kind of split my time between auditioning for musical theater and busking, playing music in subway stations. I had this insatiable need to play songs for somebody. I’d memorize every verse of  Bob Dylan’s Sad Eyed Lady of the Lowlands’ and go play it in the 23rd St. subway station right away.

I’ve been very fortunate to be a part of several off-Broadway shows (Avenue Q, Nevermore, Frankenstein, Assassins). Benny and I actually met in the cast of a regional theater show, and instantly became buds. It wasn’t until 2014 that I had the brainstorm to put a band together with Benny, Lauren (who is also my partner), and Rachel, who was a friend of a friend and immediately fit in with The Booklights’ vibe of easy, silly, and expressive rehearsals. I was also a part of the folk-rock band The Hollows, touring around the country and making records.

Speaking of good fortune, I’ve been lucky enough to work as a voice actor in animation; it was a lifelong dream come true! I played upwards of 25 different characters on the Emmy-winning PBS series Peg + Cat, and provided the voice of Doodle the dog on Sunny Day on Nickelodeon.

One of my favourite kinds of projects to work on is an actor/musician musical, where the cast is also the orchestra. Lauren and I were both in a new production of You’re a Good Man, Charlie Brown at Cincinnati Playhouse in the Park that made great use of the actors/musician structure. As a songwriter and instrumentalist, I already feel like my instrument is an extension of myself; in an actor/musician show, the same concept applies. I love the connectedness of that, and the creativity it breeds. At the time of writing this, I’m currently working on an actor/musician show in Denver called Wild Fire about the terrible wildfires in Colorado, and the people whose lives have been changed by them.

Having stage acting training is really helpful for live music performances. Anything can (and will) go awry. If you can breathe and connect with your scene partners, your fellow musicians, you can ride pretty much any wave of unpredictability. And with a bunch of hilarious and sweet collaborators like The Booklights, it’s always a joy.”

Lauren Molina: “I’m Lauren Molina and I play the cello and sing with The Booklights. I’m also a Broadway actor and have a musical duo called The Skivvies. I think my work as an actor has only informed my sensibilities as a musician, especially because most of the acting I do is within the genre of musical theatre. I made my Broadway debut in the 2005 actor-musician revival of Sweeney Todd where I played the role of Johanna while also playing the cello. There was no additional orchestra. All ten actors on stage were the band. It was life-changing. I also learned how to really sing and play cello at the same time, which I hadn’t really done much before. That new skill set allowed me a new creative combination to explore.

My second Broadway show was the comedy Rock of Ages where I played a hippie activist named Regina and belted out ‘80s rock. I also have sung country in the Off-Broadway show Desperate Measures. Singing has always been a passion, and I love performing all types of music.

With The Booklights, I love that we are all comfortable on stage being weird and silly together. We all love making music and this group feels special.”

Rachel Green: “I started playing the violin at 3 1/2. I was a precocious only child and I immediately took to my ruler taped to a cigar box (you get this first to learn how to hold the violin properly). I moved onto my tiny violin and did well for about six months on the Suzuki method, every week receiving a gold star… Until that fateful day when I got a purple star (for all I know the teacher ran out of gold stars)… and that was it. Thereafter I cried at every lesson and eventually took a four-year hiatus… until third grade when they offered string instruments to the ‘smart kids” and I figured, ‘Hey why not?! Let me try this thing again.’

For years, I studied privately, practiced intensely, played in many orchestras and participated in All County and All State. I was pretty much set to head to Juilliard or Manhattan School of Music. But my musician (French horn playing) parents advised me otherwise: ‘Don’t be a poor musician like us.’

So, I went to school for finance. I played in the All University Orchestra at Boston University, but I was not fulfilled. I explored songwriting and spoken word. I decided to take a singing class that incorporated acting to make the songs more connected and authentic. I fell in love. ‘Damnit, I guess I’m an actor now!’

I did theater and musical theater for years, often being cast as an actor/singer/violinist or an actor/musician who moves well. I did a civil war musical in Gettysburg with a Broadway director and composer. We thought, ‘This is it, we’re getting our big break!’ Well, we didn’t, but my castmate Lauren Ford introduced me to this cool cat Rob Morrison, who wanted to start a band. The rest is history.”

Benny Elledge: “Being a former stage actor; current tv and film actor, standup comedian, singer, and violinist is a strange and lovely mix. The opportunities in each ebb and flow and feed each other. Actors are storytellers, comics are shamans… and both apply to music. When you play in a band, you’re an ensemble, listening to each other and feeling and lifting the energy of the crowd. But musicians definitely have a bit more freedom to have their own moments on stage… i.e. I could never close my eyes for an extended period of time while doing standup (unless it was part of a bit). Closing your eyes during a big solo as a musician is almost encouraged, showing the crowd you’re really feeling it.

I started my acting career in my early 20s. Like most, it was slow going and has had its ups and downs ever since. I’ve done a bit of everything, in theatre, film, tv and web stuff.

I’ve done lots of commercials, mostly for regional smaller businesses. I’ve done numerous scripted web series, a handful of short films, had small to medium roles on many TV shows and some feature films. In theatre, I’ve done lots of regional shows, mostly musicals and a few national and international tours. My highlights so far have been starring in the feature film Kringle Time which debuted at the Brooklyn Film Festival and won The Audience Award and Best Male Actor for me… as well as making my Broadway debut in the musical Waitress and being in that for two years.

To be honest, acting has always been my number one joy and goal. Music was always more of a hobby. But I’ve always loved it a lot. From a performing standpoint, there isn’t a ton of difference to me. They both require the same amount of focus and a lot of the same skill sets. I think acting has always helped my music because acting really allows, nay, forces you to be very open with your feelings and choices. It makes you have to think on the fly and not go to pieces when things go a different way, which in turn helps to sometimes curb the feeling of needing to be perfect all the time and let things unfold naturally. These help so much with music both in executing playing and performing live because it just keeps your brain in a good place to try new stuff when something doesn’t work and to push forward when things go awry in a performance.

On the other hand, music has always greatly influenced my acting because when you really break down a script from start to finish, each act, each scene, each line…they all have a musicality to them. There is a flow. Like when someone plays a great solo, there’s a natural progression to how it unfolds. When you’re playing a scene there is a tempo to it and beats you want to hit for maximum effect. And as a musician, I think those things come a little easier sometimes. Or at least I understand them more.

But while acting and music definitely both have their challenges… I love them both and am thankful whenever I get to do either.” 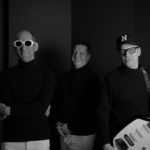 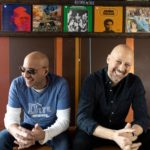