Sløtface  (pronounced slutface) are a Norwegian pop-rock quartet who effortlessly meld indie-pop melodies, punk-lite thrash, and casual-chic vibes into one propellant little package. They bite, snarl, and purr at all the right moments, and they are a genuinely infectious treat to listen to. Occasionally coming across like a snappier, edgier Metric – an inevitable comparison as lead singer Haley Shea’s vox are often very Emily Haines-esque – Sløtface are undeniably their own creation, carving out their own paths, with their punk roots and explicitly-feminist bent helping their claims to originality.

With their second album, Sorry for the Late Reply, dropping in late January via Nettwerk/Propeller Recordings, Haley and co. (Tor-Arne Vikingstad, Lasse Løkoy, and Nils Jørgen Nilsen) are joining us for this Stereo Six to explore six albums (with one curveball entry) that helped shape their latest release. Enjoy the earworm tunes, and get sløtty with some great records.

We’ve always been really influenced by LCD, and for this record, we even had new LCD! The dancy-punk thing that they do so well is a huge inspiration to us, and something we’ve really aspired to emulate, especially on tracks like “S.U.C.C.E.S.S.” and “Tap the Pack” we were going for the steadiness that builds and builds until it just explodes.

This record came out while we were working on finishing up the new record. We’re huge Pheobe Bridgers and Conor Oberst fans, and a lot of their music came up when we were looking for mixing influences and vocal effects. “Big Black Heart” was a song producer Odd Martin and lead singer Haley listened to, especially to get a really cool vocal distortion right.

More Conor Oberst (he’s best when he yells). Huge influence lyrically as far as some of the tongue-in-cheek snotty-brat political critique, and also the use of vocals and guitar sounds that aren’t always perfect. Especially important on “Telepathetic.” Also big fans of all of the ‘bits’ on this record (and every record) where the band slot in recordings of speaking in between songs. Conor Oberst is quite the expert on this.

For “Telepathetic,” we were trying very hard to be a slightly cooler Avril Lavigne and Conor Oberst kind of love-child. Listen to the solo on “Telepathetic,” and you’ll get what we mean. For us growing up, Avril Lavigne was the ultimate cool girl, and we really looked up to her as a huge pop star who was still angsty and tough. “Sk8r Boy” is still the ultimate jam, and you can find us singing it at Karaoke all over the world.

The working title of “Sink or Swim” was just ‘Gorillaz’ for a long time. We were trying to make something that felt very cool, that just chugged along, but also had a lot of cool details and ideas running through it. The singing/rapping style of Gorillaz is also something we find really effortless and inspiring.

Might not be very clear in the sound of the record, but Kacey Musgraves country-pop was a big reference for us as far as lyrics and making great pictures with the lyrics go. We also talked a lot about this record as a good example of mixing genres – the way Kacey does with pop and country – in the way we wanted to blend pop into what we were working on as a rock band. It’s also a great record that we all like and would listen to in the studio for a bit of a break from our own stuff. 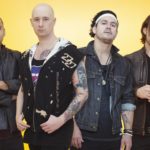