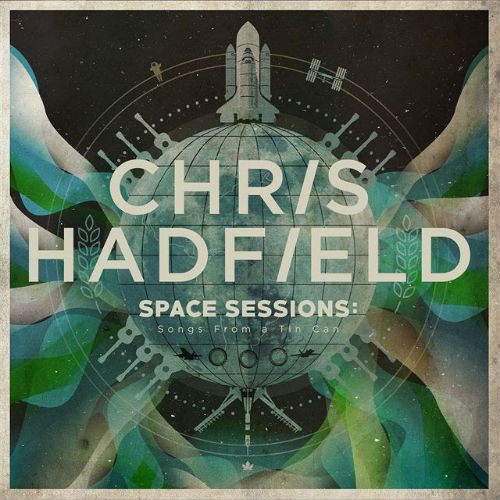 Everyone’s favorite Canadian astronaut, Colonel Chris Hadfield recently released his debut album Space Sessions: Songs From a Tin Can – the first sessions to have ever been recorded ‘off planet’.

Recorded during the 5 months Hadfield spent aboard the International Space Station in 2013, the twelve-track record includes his viral cover of David Bowie‘s Space Oddity.

Unsure of what kind of sound to expect from the Col., I was pleasantly surprised to find a thoughtful, intimate collection of material covering a wide range of emotions that I can only assume comes from being one of a very select few who not only went to space but also got to live there.

Working with Juno Award winning producer Robbie Lackritz and a slew of talented musicians such as Don Kerr, Afie Jurvanen, Mike O’Brien, Ben Lester, Jay McCarrol and Dan Goldman, Hadfield was able to fulfill his vision of full instrumentation for the tracks once back on earth.
Track by track, the listener is able to journey with Hadfield and get a glimpse at what life must be like for an astronaut, including the longing for a human connection with family and friends, the curiosity of everything new happening – the questions, the unknown, the excitement.

By far my favorite track is ‘Window Of My Mind‘.  Reminiscent of early Gordon Lightfoot, it really has a solid folk/roots sound that I could listen to over and over. I also particularly liked ‘Daughter Of My Sins‘ and ‘Ride That Lightening‘, the latter offering a southern blues/gospel feel to it. Anyone who enjoys the christian hymn ‘Will The Circle Be Unbroken‘ will not be able to get enough of this track.

To be honest, anything to do with space blows my mind, and the fact that someone recorded an album in space is almost unfathomable to me. You need to listen to this album 1) because it’s history in the making, and 2) because it’s really really good.

CD and vinyl editions, streaming and exclusive bundles are available at www.chrishadfield.ca/music

Wampyric Rites – ‘The Eternal Melancholy of the Wampyre’ [Album Review]