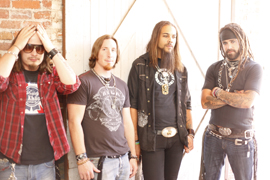 Recently, we spoke with guitarist and vocalist Dave O’Rourke and got the skinny on 2Cents’ history. 2Cents is a Southern California quartet that most of PureGrainAudio readers are probably not familiar with yet, but that might change soon. Their blend of chunky guitars and hooky vocal melodies brings to mind Pantera in their more commercial moments. Their new album, Dress to Kill, just hit stores, and 2Cents also just hit the road with Korn, on the latter’s Jagermeister sponsored headlining run.

To start off, you have to tell us about the name and the meaning behind it.
Dave: It started off as a meaning of speaking your mind but the more aggressive and hard our music got the more out of place the name was. That really appealed to us. We like sticking out even if it’s our corny name that helps us do it.

Give us a quick background on how 2Cents formed and the influences that helped shape the band.
Dave: We formed with the idea of making music our own way. We were influenced by bands, artists, actors, writers, athletes. Anybody who was driven by uncompromised passion without regard to popular opinion or superficial judgment.

Some of our readers might recognize your new guitarist, Adair Colbey, from his days in Mantis. How did you guys cross paths?
Dave: We went on a tour together back when we had just finished our first record. That’s actually how we met our bass player Jason as well. He played in Burden of Guilt. So the tour was 2Cents, Manntis and Burden of Guilt. We all met and just hit it off. Looking back that was one of the most important tours I have ever been on. We are pretty much as tight of a unit as you can get. We live together work together party together. I couldn’t imagine 2Cents without them.

You just released Dress to Kill, which is your sophomore album. Matt Hyde (Slayer, Monster Magnet) produced it, but we would imagine he’s very expensive to get on a project. How did you guys hook up?
Dave: Matt Hyde is almost the fifth member of 2Cents. He has been such a huge force in helping 2Cents even happen. He is a dear friend and one of the most talented, knowledgeable dudes I have ever met. We met through a producer called David Foster. David invited Matt out to a show and Matt was pretty much on board since then. We are truly grateful to have someone like Matt in out corner.

Though the album is definitely on the heavier side of things, you manage to throw in some huge hooks into the songs. How important is the melodic undertones of the band to you?
Dave: Huge! Those are the parts you separate yourself from other bands and put your own stamp on your sound. Just monotone screaming into a microphone while the music behind you shreds away is NOT covering new ground. When a song ends we want to stay in your head, we want to leave you with something you can’t let go of. For an idea to be truly dangerous it needs to resonate.

Adam plays drums and sings lead for 2Cents. Outside of bands like Exciter and Nocturnus, there haven’t been many metal bands where the drummer also sings all of the material. How tough of a transition was it to pull off in the live setting?
Dave: Pretty easy. We set the drums up sideways at the very front of the stage. It’s a unique set up and it tends to grab people’s attention.

Your MySpace page mentions something about a reality show you’ve been filming about the music world. Can you give us some more details about that project yet?
Dave: We actually filmed a pilot and it got a bid from a big network but we decided we wanted to cover more ground with our music before we tried to cram a TV show down the public’s throats.

You are currently out on tour with Korn. Can you describe a typical day for the band during this trek?
Dave: A typical day for us on the Korn tour consists of us trying to scrape our jaws off the floor over how fucking amazing our life is.

What songs are going over well on this tour so far?
Dave: “Get What” is always a crowd favorite. People are also digging the surprise cover we do at the end of the set.

Great things seem to be happening for 2Cents right now. What advice can you give some of the up and coming bands reading this?
Dave: First of all realize you will never make it. If you still want to pursue this life you have what it takes to make it.  [ END ]