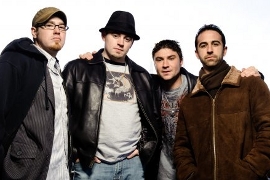 Interview with My Silent Bravery vocalist and guitairst Matt Shwachman

“We are pumped. It has been two years in the making and we couldn’t be happier with the outcome and the feedback we have been getting.” Those are the words of Matt Shwachman frontman for the New England based rockers, My Silent Bravery. The band’s newest CD, Are You Prepared is sure to create a buzz as each and every tune could easily be heard on nearly any modern rock station across the country. This solid rock album is packed with well-written, well-produced tunes. The band has played over 150 shows in the past eighteen months and they are planning to play out as much as possible in the year to come. Here is how the conversation went.

Now that your brand new CD, Are You Prepared is complete how do you feel about it? Are you satisfied with the outcome?
Matt: We are pumped. It has been two years in the making and we couldn’t be happier with the outcome and the feedback we have been getting!

It has been almost two weeks since your CD 0release party. What has been the fan reaction so far?
Matt: The CD Release party was awesome. We sold out Harpers Ferry in Boston and had our faithful on hand to support us. The fan reaction to the new CD has been great and the overall feedback and support have been amazing.

What was the reason for changing the name of the band from the Matt Shwachman Band to My Silent Bravery?
Matt: We had been debating a name change to a band name for the last year or so. While relentlessly gigging the last 18 months, we found the majority of the people that would come out and see us, would love the show and music but had a hard time digesting Matt’s last name. With the new record, we wanted to attract as many people to the sound as possible, and for people to be able to find us easily on the internet. We thought the new name would appeal to our existing fan base by keeping the MSB identity in tact, while also looking ahead to the future of what is to come.

When you begin to put this disc together, were you concerned at all about commercial success?
Matt: We were concerned with making a great album that was accessible enough for people of all ages and demographics to enjoy while spreading a positive message. We think we accomplished this goal and hope for the best in terms of its commercial success.

What has been the most memorable moment of your career so far?
Matt: The Harpers CD Release Show along with our three day stint at the Chicken Box in Nantucket stand out in terms of memorable shows. Having the song “Wait for Me” played on the closing scene of the season of the ‘Real World Cancun’ was pretty cool as well.

How quick are you in the studio? Can you usually knock things out in a couple takes?
Matt: We are a get it done kind of band. We don’t like to waste time as we are all busy. We will do as many or as few takes as needed until our producer has what he needs.

Do you decide on a suitable sound fairly quickly, or do you tend to tweak tones obsessively?
Matt: Live, some of us are pickier than others with our tone. We tend to get most of our levels and tones squared away at sound check to adjust to the room. In the studio, it is similar, but we also left a lot of the tweaking up to our producer Andrew Gallagher of Waterway Studios. There was a trust there in that he would bring out the best in all of us sonically.

How much roadwork do you expect to be doing this 2010?
Matt: We expect 2010 to be busy, busy as usual. We played over 150 shows in the last eighteen months and we plan on staying busy in 2010. We have a packed calendar of dates in the North East this summer. Check out our website for a full listing of events.

When you are on the road for a while I am sure you see and experience many different things you might not even have known existed. Are there any stories that stand out in your mind as being exceptionally strange or odd?
Matt: We all found it strange that for a photo shoot at our show last summer at Patriot Place in Foxboro we found ourselves sandwiched between the N.E. Revolution’s cheerleaders squad… weird.

When you are out on the road anything can happen and often does. Can you think of any disastrous events that happened while out on tour? How did you solve the problem?
Matt: Hugh’s snoring was a big problem. Breathe right strips did the trick!

Any closing words?
Matt: Thanks so much for the support. Go to our website for a free download of our hit single “Not Necessarily So.”  [ END ]