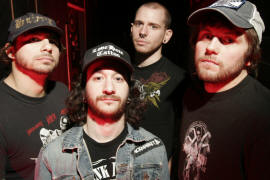 This is how the band Psyopus’s bio describes their brand of music. Let me tell you this is one very different record. From the very first song the listener is assaulted by in your face guitars and vocals that are just… unbelievable and possibly indescribable. This is a record you just have to hear to appreciate, nothing can accurately describe what awaits the listener when they first hear the bands newest offering Our Puzzling Encounters Considered. Guitarist Christopher “Arpmandude” Arp took a few moments out from the band’s national tour to answer a few questions about this incredibly avant-garde record.

Your bio says that Psyopus is composed of bi-polar dynamics, radical arrangements, avant-garde instrumentation and a melting force of pure speed, Psyopus set out to destroy the molds of extreme metal with unprecedented attitude and conviction.” Can you explain what that means to the listener?
Arpmandude: Well, the bi polar dynamics is going to mean that the dynamic changes in the songs are going to jolt the listener from here to there. The dynamics contrast each other suddenly and absurdly. The radical arrangements part is a reference to the absurd display of music arrangement we at times strive for. Don’t expect stanza/pre-chorus/chorus/stanza/pre-chorus/chorus from our material. Where metal music can often be recognized by over composed arrangements, riff after riff, we try to take it to another place accounting for everything we can from meter, repetition, key, placement of ideas… any variable we can think of we try to do something different with it to the best of our abilities at the time. The avant-garde instrumentation and speed is in reference to how we decide to play our instruments. I’m always trying to attack my guitar under a new light. And when you pick up a Psyopus album, you’ll be sure to here tempos with intensity. Our will to keep these ideals a focal point for our material in one way or another is were the attitude and conviction come into play.

The name of the band Psyopus is interesting to say the least and it sounds as if there is a story behind it. Where did this name come from?
Arpmandude: The name came from the original drummer, Greg Herman, and I sitting in his room trying to come up with a name for the band. I ended up just putting the prefix “psy”, implying psychological or psychotic, and the word opus with its musical connotations together to make Psyopus.

Give us some insight into this record and the meaning behind the title “Our Puzzling Encounters Considered”. Give us some insight into the album lyrically?
Arpmandude: I’ll answer both questions together. The meaning behind the title of our album comes from the basic subject matter of all the songs. All of the song’s themes have some revolutions around concepts pertaining to relationships, generally in their ill mannered states.

“2” – The stereo oriented song 2 covers the idea of Siamese twins and the idea of the loss of one person to the effect of the others survival.

“Scissor Fuck Paper Doll” is about the letting go of the delusion one has about an intimate partner. Based on the law of experience, relationships are based off of perspective on another individual and people have to remember that the person they think they are in love with, accurate or inaccurate, are actually ideas of who they THINK the person is or what that persons means to them.

“Insects” is the loosest of these ideas. It’s really about the idea of seeing a rotting body with insects all over it and considering the sound an orchestra versus the sound of nature actively decaying a body. There are overtones of good and evil and fate or karma that connects the lyrical content of this to the albums theme.

“Whore Met Liar” is a song that’s lyrics pertain to what I like to call the “Fatal Attraction Effect”. If you’ve seen this movie it’s about a gentleman who cheats on his spouse with an obsessed and crazy woman. This woman, or this decision, haunts this man well beyond what he considered. This song is about cheating on your spouse basically.

Imogen’s Puzzle pt 2″ – while it does not have any lyrics, one can consider that it keeps the relationship concept alive in that the first album has “Imogen’s Puzzle” (pt 1 if you will).

“Kill Us” is a song about necrophilia. What sexier of a relationship can one ask for?

“Siobhan’s Song” is an instrumental song that was written during a very hard time in my life. It’s the song I created while trying to focus some ugly feeling elsewhere than on torturing myself.

“Happy Valentine’s Day” is a song about that’s lyrics are about that break up with the crazy person you once dated. We’ve all experienced that either personal or vicariously. Some more than others. 🙂 hehe. This sarcastic song goes out “to all of the girls I loved before.

And last, but not least, is the title track that actually was written after the title for the album had been established. “Our Puzzling Encounters Considered” is about the frustration one has during an ongoing bad relationship where both partners aren’t seeing eye to eye. Generally they don’t want the same thing from each other and the lack of communication or understanding creates troubled souls.

What has been the reaction of fans to the record?
Arpmandude: Well, the word bi polar will come up again. Whereas the fans seem to be 100% supportive, it’s the critics who where either all the way to one side or the other. It got praise for pushing the music envelope and being it’s own album in a world of cookie cutter music. But on the other hand, it received reviews stating it lacked memorabilty, it was noise, it’s all flash, it makes no sense and that we need to learn how to write songs. 🙂

Different groups have unique ways of writing songs. How do you guys go about writing your music and lyrics? Is it a collective effort or is it the efforts of one particular member of the band?
Arpmandude: I’m certainly the driving force behind the creative output for the band. But, I do try to create the lyrics and the music in as many ways as I can see fit. When you are working on material in a rehearsal room with a bunch of dudes, versus sitting down and experimenting with notes in your head, you are going to have different ideas come up. I try to keep everything as fresh and as creative as possible, while trying to maintain an integrity that fits the band.

What are some of the artists or bands which have greatly influenced you guys and your music?
Arpmandude: Lethargy, Kalibas, Megadeth (up to Rust in Peace), Pantera, Korn, Mr Bungle. That would be a good list to start with.

The songs on Our Puzzling Encounters Considered are not exactly typical of this genre of music. You experiment with arrangements and push the envelope for this genre. What was the inspiration for this and is this a desire to explore new realms of music?
Arpmandude: It’s about two things. First, yes, it’s about trying to come up with new types of music. Challenge ourselves to see what we can think music to be. The second is a direct revolt against the mundane that clogs our present music scene. Too many break down bands. Too many death metal bands. Too many metal core bands. Too many nu metal bands. So on and so forth. I think so much of it is crap and I don’t want to playfully go along with it. There’s a place for everything and everything in its place. With that, Psyopus is here to stir up the bullshit and remind people to be original and not worker ants.

The public perception of life on the road differs greatly from the reality of it. Can you tell me a little bit about how you travel? (Bus, Van etc…) What accessories do you equip your ride with to make the time go by? What are the living arrangements like while on the road?
Arpmandude: Well… the road is fun but, it’s hard living for sure. You’re not as financially prepared as you would be if you were home working a descent part time job. We usually sleep on friends/fans floors with sleeping bags in city to city. IPods with tape adapters are key. Showers are awesome. Food and hospitality adorn angel wings.

What is next for Psyopus?
Arpmandude: Touring with Today is the Day, Mouth of the Architect and Complete Failure. Writing for our next album. Scheduled to go into Watchmen Studios July 20th to August 16th. The new material is different. I’m interested to see what the fans are going to think. It’s not a sell out album in anyway, so don’t be scared. It’s just really different.  [ END ]