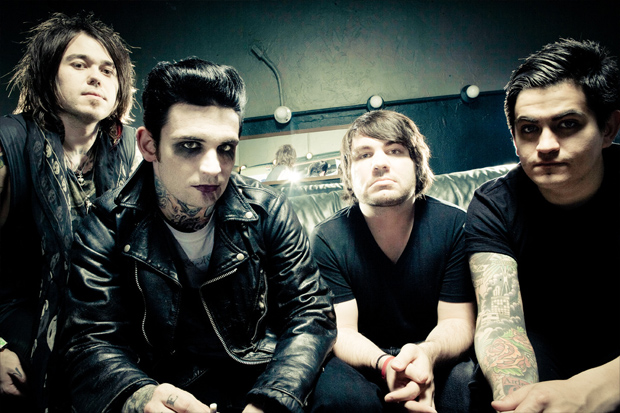 When bands are on the road for long periods of time it’s normal that after a while the musicians themselves will succumb to fatigue. Screw that… they’re bound to be tired as shit! In any case, as I entered the Phoenix Concert Hall in Toronto, Canada in order to conduct my interview with Aiden, it came as no surprise when I learned that frontman wiL Francis was catching some much needed Z’s backstage. You see, Aiden is currently on tour in support of Nightmare Anatomy, their first full-length release on Victory Records and tonight would mark yet another show on this gruelling tour. After wiL was finally awoken and introduced to me, he told me that he had just finished driving throughout the entire night… hence the backstage sleep! After a little while wiL quickly shed his post-sleep fogginess and we got right into the interview. Needless to say, even though he most likely would have rather slept for another hour or so rather than talk to yours truly, wiL stepped up to the plate, showed his true colours, and got right into the interview. Even though I was on his turf, this dude was so damn hospitable, and was totally happy to be able to jam about the origins of his band, their latest release, and tours – both present and future.

Aiden formed during the spring of 2003. Can you give us some details about how exactly the band came into existence?
wiL: Yah… Jake and Angel all went to school together and started to toil around with the idea of Aiden. They first had a singer come in who was a mutual friend that I knew and he asked if I wanted to come and play bass, so I came down and I just started jamming on the bass. He decided that he was gonna go to school, I became the singer, and then we found Nick like a couple months later.

Where did you get the idea for your band name?
wiL: Ah the movie The Ring… there was a little kid in the movie… Aiden. That’s it.

Already in December of 2003, you entered a studio and began recording your first album “Our Gangs Dark Oath.” This album was released in June 2004. How has it faired so far and what made you hit the studio so quickly?
wiL: It was good… we got a great reaction from it locally and the tours that we did… every time we would go back to the places they would be singing the songs. So in June when it came out… and the end of the year December, that’s when we got signed… and we did another EP in December too. So… we just wanted to keep shit fresh you know… just get some new shit out.

Before the CD was even finished, you took it upon yourselves to make and distribute about 2000 CD samplers of material that would be on that release. Can you elaborate on how and why you decided to embark on this no doubt tedious mission?
wiL: We just wanted to get it out there to as many people as possible… It doesn’t really sound like a lot, but when you’re sitting at a computer burning 2000 discs and then making little cardboard cut-out things. That’s a lot dude… that’s a grip! So like 2000 was… we were like, “alright we’re done with this, this better just be enough.” [laughs] We’d pass them out at Warped Tour, we’d pass them out at local shows, bands would come through town… we’d give ‘em to them. So it worked really good.

During 2004 Aiden played over a hundred shows. How the heck did you guys book so many gigs and how did you do all of this within so little time after your initial formation?
wiL: We just fucking went for it you now? We didn’t fuck around. Those guys were still in high school so we could only do shows on weekends and whenever they had break, like Spring break or Christmas break. So we played a show every weekend and every time they had a break we did a tour. We just went for it!

It was during this very busy time in your lives that you attracted the attention of Victory Records. When and why exactly did you choose to sign with this label in particular?
wiL: Out of all the other labels that are out there, we feel like Victory Records would be the best home for us. The way that they run their label is really attractive to us, we really like the way they promote their bands. What their bands do… their bands are always on tour. And that’s what we want to do. We wanted to get on a label that would let us tour all the time.

In August of 2005 you released your Victory Records debut, Nightmare Anatomy. How has this album faired so far, what are your fans saying about the album, and how do you feel about the record?
wiL: This record has done amazingly well. I never thought I would have sold this many records ever. I think it’s sold like 20,000 records now in about seven weeks. I feel that it’s the coolest thing I’ve ever done… like the coolest artistic endeavour I’ve ever been involved with. I’m really happy with it and every night we get to play the songs, so I’m extra stoked. It’s awesome!

How did you come to name the album and does it have a theme?
wiL: We were kind of toiling with… brainstorming ideas about what the title should be. And when I was initially writing the songs I didn’t really notice, but a lot of the songs reference ‘nightmare’ and situations that are kinda like that. So when we were brainstorming ideas Angel actually threw out Nightmare Anatomy and it just seems like it fits.

You’re scheduled to hit up Europe in mid-January 2006. Have you played in Europe before and either way, are you excited about this trip and why?
wiL: Yes! We were there in May… last May… and then we went back in October and it was fucking nuts. So now we’re going over with this band Bullet for My Valentine. I’m fucking stoked; it’s going to be amazing!

If there was any one band that you could go on tour with, who would it be, where would you go, and why?
wiL: Maybe like… maybe with Nirvana to Japan… [laughs] That’d be awesome! I seen videos of those guys in Japan like a long time ago… seems like a good time.

How has this current tour been and other than more touring, what else lies ahead for Aiden?
wiL: Nothing other than touring lies ahead for us. [laughs] This tour has been fucking amazing. Like every night the shows have been incredible. Before we got on the tour we’d already known the bands so when we started to tour it wasn’t like “hey what’s my name… what’s your name?” and everybody knew each other and we’re just traveling together now. So that’s cool! It’s been amazing you know?