Started over a decade ago, Me and My Friends offer up a unique blend of Afrobeat-inspired grooves described their sound as one that is “carved from their very own niche of sun-drenched music for the soul.”

As we head into the cold winter months, the release of their soul-warming new single “Everybody’s Talkin’” couldn’t be better timed. The single is taken from their upcoming new album, Before I Saw The Sea, which is due in January 2023 and you can check out the video here:

Speaking about the track and the inspiration behind it, singer and guitarist Nick Rasle said:

“I was playing around with weaving a sliver of train ticket through the strings of a guitalele, and the buzzy sound reminded me of the mbira [East African thumb piano] and the hang drum. I tried to recreate a Portico Quartet-style groove and suddenly Madeleine Peyroux’s jazz ballad version of ‘Everybody’s Talkin’ came to mind. This strange combination developed so organically and we joked that we should put it out in time to be a quirky Christmas single.”

Following the release of Before I Saw The Sea in January, the band hit the road for a full UK tour in March/April. Get all the dates below: 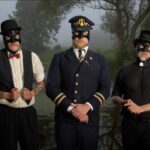 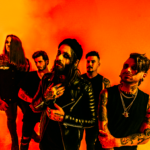