As important as your family is to your growth and development, it’s with your friends where most of the good times occur. If you had to describe Bealby Point in only a few words, you may say something like, “the band is a celebration of friendship and memories.” That’s what you’ll find contained throughout their brand new EP Fridays, a selection of songs inspired by the members’ friends and all of the good times they have spent together, growing from children into adults.

There are so many cherished Friday nights, house parties, nights in, in front of the TV, and nights out, bar hopping and getting home at 6 am. The Fridays EP attempts to take these intimate, unique moments and capture them within songs and lyrics, providing the soundtrack to your weekend get-together.

It was 2018 when the members of Bealby Point really began to recapture their friendships from their youth, projecting it towards the band and music in general. They all come from the same area of North Vancouver, a coastal neighbourhood called Deep Cove. The band name is taken from the quartet’s favourite beachside vacation spot in the British Columbia interior.

Speaking of Vancouver and its many wonderful establishments, Bealby Point has today joined us to share their Top 10 local bars and clubs, where the band members have spent many a night and where lifelong friendships were made and fortified.

“A great low-key bar that has a cool intimate stage. We had the pleasure of playing there a couple of times before the pandemic, so it has a special place in our hearts. Whether it’s a chill acoustic performance or a hardcore rock show, The Railway Club doesn’t disappoint. An underrated spot, to say the least.”

“Bealby Point has visited the Blarney Stone many times. As restrictions were lifted, we found ourselves becoming regulars on the Blarney dancefloor. The killer live bands that play on the weekends keep us coming back. Vancouver has lots of great spots for a night out, but being able to rock out to some live tunes really makes the Blarney stand out. Apparently, it’s the longest-running Irish pub in town, and we hope it sticks around for many more years.”

“Saw the Jungle Giants play at the Imperial. The venue has a cool vibe with a large and vibrant stage and multiple levels. There is a top balcony, a middle section, and a small staircase from there that leads onto the floor. The bar is also enveloped by greenery resembling a garden. The Imperial doesn’t look like much from the outside, but once you get in, it shows it has a lot to offer. We really hope to play our own show there someday.”

“At first glance, this dated hotel and music venue may appear filthy and unappealing. However, the place comes alive at night with high-energy music and a surprisingly chill, welcoming vibe. This is a great venue to see up-and-coming bands and musical acts that stray away from the mainstream. We recommend giving this place a shot as it won’t disappoint.”

“Another awesome underground venue. We’ve seen and heard some extra loud acts there. The venue has staircases that lead down to the floor and put you right below the stage and right in the action. It is also conveniently located just minutes from the Seabus which takes you from our neck of the woods into the downtown core.”

“We’ve only had the pleasure of going to the Rickshaw once and it was for the Kingfisher Bluez Christmas party back in 2019. We got to see lots of amazing local bands, including Peach Pit. The venue itself is great; it has a very open main room that has great sound for live music and an almost punk-like attitude. It is encapsulated in the bathrooms, which are sticker bombed by every band you can think of. I would highly recommend seeing any band in this legendary Vancouver venue.”

“This smokehouse is home to excellent draft beer and top-tier southern BBQ. Located a few blocks away from Rogers Arena, it is the perfect joint to hit up before a hockey game, concert or any other event. It’s also a fantastic place if you enjoy sharing appetizers and platters with a group of friends, as you’ll want to try several menu items. Definitely give this place a go if you’re having a night out in downtown Vancouver.”

“Definitely not an underground venue as it’s one of the most popular in the city, but we have included it because it is probably our favourite spot to see live music. The venue has an awesome sign out front which is unmissable and has a killer sound system. The venue hosts balcony seating as well as rows of seats leading to the floor, but let’s be real, you’re going straight to the floor. We have seen lots of amazing bands at The Vogue, including Catfish and the Bottlemen, Bahamas, and more recently, we saw the local band Hotel Mira! If you haven’t seen a show at The Vogue, you are seriously missing out.”

“Fortune was one of the clubs in downtown Vancouver we first started going to when we became legal. The club is LOUD, and it’s always a party there. Fortune probably has the greatest sound system in Vancouver and typically showcases the speakers with DJs and rap artists. Once you walk up that unassuming staircase at the entrance, prepare to have your eardrums attacked.

We have actually never seen a live band play there before, which is ironic because we are actually booked to play our EP release show there in a few weeks. We are stoked for it and since we’ve been going there for so long it will be a nostalgic experience.” 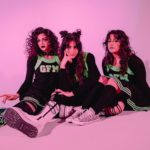 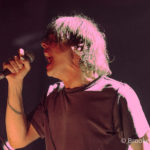