If managed by legendary showman, P. T. Barnum, they would be promoted as an oddity — a circus freak sideshow, right along with the bearded lady, the 900-pound man, the Siamese Twins and the monkey boy. I mean, c’mon! A real rock band? In 2021? That kind of thing became extinct years ago, right?

It probably wasn’t the first time they’d been the “square peg.” Still reeking of booze and refer from the previous night’s gig, Switch N’ Whisky staggered into the backstage area of a recent outdoor Florida music festival at the crack of noon. Also on the bill that day; an adorable four-piece collective from the nearby elementary school and a cozy cover band compromised of middle-aged electronics engineers. And to an outsider, a logical question might have been, “Hey, who booked Black Oak Arkansas for family fun day?”

Simply put, Switch N’ Whisky is the real deal — a hard-working, fast-living, authentic rock and roll band, navigating through a world in which airbrushed, Auto-Tuned poster kids now define the genre. Apparently, the band members were passed out in their van when rock’s obituary was published some time ago. But the South Florida-based brigade isn’t entirely alone in their crusade. U.S. stalwart Dirty Honey and Canadian combo The Damned Truth also have been dragging the rock and roll flag through the trenches in recent years, along with that other American group — you know, the one that sounds exactly like Zeppelin, yet refuses to acknowledge it. But I digress.

From the get-go, the Switch N’ Whisky story just didn’t make sense. The band began brewing back in the fall of 2016, when two young fellas, bassist Hatchet and guitarist Coby Dante first connected and realized their creative common ground — their shared passion for music from the past. Soon, local drummer Eric Steffon was recruited for their whisky-soaked excursion. Next, a random Internet discovery put Vern Daysel on their radar. In short order, the South African frontman had relocated to the States and also was on board. With their lineup now in place, Switch N’ Whisky was ready to rock.

The band quickly cemented a solid rep on the Florida rock scene for being destined for the big time. A recent performance in Palm Bay, Florida prompted one particular female enthusiast to comment how she’d not seen or heard a band that looked or sounded so great in a very long time. “What’s not to love about Switch N’ Whisky?” she was overheard asking a nearby bestie. Out of the mouths of babes, indeed.

With live ops all but exterminated (even in Florida) during the recent health scare, Switch N’ Whisky headed into the studio and began recording an album of their own material — songs which always had been stronger than most of the classics they covered in concert. And although the full-length record won’t drop until later in the year, the band is teasing its faithful flock with a newly-released summertime feel-good single.

What could have been an outtake from Nuthin’ Fancy or Tomcattin’, “Keep It in the Red” fires like a Smith & Wesson — straight from the nether regions and hits the target with master marksman-like accuracy. Pegged in the red by layers of dirty guitar grit and driven by a throaty bass chug, the track is fueled further by Daysel’s seemingly Tritt-inspired swagger — not that the song is country, it’s a true blue cock-rock anthem. But it does pack enough downhome “Howdy Ma’am” appeal to make even the “woo girls” over at the Luke Bryan after-show soiree swoon, just a lil’ bit. The companion music video arrived on YouTube just last week, and it’s equally compelling and of world-class quality.

Sporting long hair, tight trousers and low-strung guitars, in 2021, Switch N’ Whisky IS a circus freak sideshow, for sure. But, boasting an arsenal of straight-up down and dirty tunes, unbridled passion and unrelenting street-smart determination, the band also just might blow up, huge. Dig, if you will! 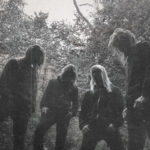