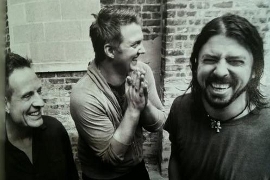 Additionally, MySpace Music debuts a brand new Transmissions session featuring Band of Skulls. The session is now live at www.myspace.com/transmissions and available for free download. The band performs songs from their debut album, Baby Darling Doll Face Honey, and gives an exclusive interview. The trio’s single “Friends” is included on The Twilight Saga: New Moon soundtrack, which was created especially for the album.

MySpace Transmissions is an original program featuring exclusive performances and in-depth interviews taped in intimate studio settings, allowing viewers inside access to their favorite artists. Users are able to add the content to their profiles, virally share the videos throughout the network, and purchase and stream the audio tracks via MySpace Music.

Band of Skulls is an alternative British rock band comprising Russell Marsden (guitar and vocals), Emma Richardson (bass and vocals) and Matt Hayward (drums). The band joins some of today’s most sought after musicians on The Twilight Saga: New Moon soundtrack, including Thom Yorke, The Killers, Muse, Death Cab for Cutie, and others. Baby Darling Doll Face Honey was produced, recorded and mixed by Ian Davenport (Supergrass, Badly Drawn Boy) and recorded at Radiohead’s Courtyard Studios in Oxfordshire. Band of Skulls is currently touring in the UK and will play shows in the US beginning in November.