Italian goth rock/metal band Lacuna Coil recently released their fifth studio album, Shallow Life and have started to see success with “Spellbound,” the first single from the album. Shallow Life has proven thus far to be their most successful record in the States to date, reaching number 16 on the Billboard 200 chart. I recently had the chance to speak to vocalist Andrea Ferro about the band’s process for writing the new album, why they sing in English vs. Italian, and why their live show is not to be missed.

What approach did you take when you began writing the new album?
Andrea: Basically, even before we start the song writing we were considering which way we could make our music still interesting for our fans and for ourselves as a band and which way was the right way to go and we thought that the only honest way to go was to go whatever way we wanted to go and try different things, different types of things, different influences and just go with it and see where the music was gonna take us as a band. So we just did it and we just wrote more heavy songs, rock songs, all type of directions that were coming into our mind, we just went with it. We had like, 25 different ideas for songs in the end and we covered the 15 that were more interesting and also were more true to our history, the Lacuna Coil style even if it had a little different approach, a little different sound and feel it can be suitable for our band. So I think we went pretty free, just go and see where the music was going, ya know?

We just tried stuff and we had all these songs, and some were nice songs, maybe too much far away from what we are as a band so we thought, “OK, we can incorporate new album but we have to see where we’re coming from, our history as a band, so it was very important to me a little bit of our roots with a little bit of a new offer we want to give to the people.” Also because we are not the type of band who can keep repeating the same formula over and over so we’re not really able to do that because it would not be honest in the way we are as people as well as musicians, so we like to just try something else and see. You have to take chances if you want to progress as a band. People could love it or they could hate it, but you have to take some chances as a band.

It seems to be very well received so far.
Andrea: Ya, we have been really surprised by the reaction of the people and the media, and of course we expect some people to just not like it any more because it’s too much different, ya know, some people need their favorite band to be the same for something strong in their life, for something strong and stable. We’re not able to write music just for the fans we need also to like what we do, to be inspired to be creative as a band. Also because we have to play live, all the songs, so we don’t want to play for the rest of our lives songs that we hate.

So how do you decide who sings which parts?
Andrea: Basically we don’t really care who’s going to sing the part as long as the part sounds good. We always try to work with the voices as two instruments, so whatever part fits better with Cristina’s voice, it doesn’t matter if I wrote it or if she wrote a part that I’m going to sing, we always like to exchange it to see what is best for the final result of the song, regardless of if I wrote 30 percent or 50 percent or whatever, we never look at it in that way, we just want to have the best song possible. It’s all for the music and that’s the way we usually work. And this time especially we’ve been coming out with a lot of parts for every song, like a lot of different choruses that can apply and then we just chose the one that was really convincing and really strong, the strongest we could have, you know, so we don’t really have to sit down and split the parts. As long as everybody is positive and participates in the process it’s fine, and also the way we split the income in terms of the band is, we split everything in six, regardless of who’s been writing most of the music and who’s been doing something for the Web site or some other stuff you need to do for the band. As long as everybody works it’s fine for us, ya know because we don’t want people to write music just because they have to have their share of the money. We want to have the best people to write the best music. That’s why we don’t care, as long as everybody’s working hard with the same goal it’s perfect for us.

What is your song writing process like, what inspires you?
Andrea: Basically, this time around, especially for “Shallow Life” we’ve been changing the usual process because before we were working a lot from the computer at home and Marco, the bass player was the main song writer and he came up with up with all the ideas and then we just go to the computer and record some vocals, some ideas for vocals. This time we’ve been starting completely different, sometimes we start the song from the vocals, like we come up with an idea for a chorus and we give it Marco was playing around the music and build the song around the vocal line and or we’ve been doing more of a band effort like everybody came in with idea like Cris the guitar player and Marc, the other guitar player composed a lot of the songs, and there’s been much more exchange, much more working in the practice and rehearsal instead of at home working separately, and then just put together everything.

This way I think we’ve been more able to go to the essence of music instead of keep adding arrangements on the music like keyboards or violins like we did in the past a lot because maybe we didn’t feel like the song was strong enough so we were putting more and more arrangement to make it sound more open or more complete. This time we’ve been working and practicing with the basic instruments that way it has to be stronger right away from the basic essence of the song. That’s why when you hear the new album there are a lot of songs that are simpler in the structure in the way the arrangements are made, but all the single instruments and the voices, there is much more attention on every detail of the single instrument. We’ve been able to let the most important things come out of the song losing a little bit of the vocals in the middle of the keyboards or in the middle of the violins, so we’ve been able to be a little more straight in your face with this album.

Did you start singing in English or was that something you had to learn later?
Andrea: Ya, we start right away in English because all the bands we listened to were from the UK or America so we grew up listening to American rock bands or British rock bands. We never really had this style of music in Italian. Italian is a very good language, very melodic, but it fits very well with traditional music and more love songs, it’s very soft and melodic. It’s pretty well for that kind of music but for rock music English is just much better because it’s very different… with one word you can express a much wider concept where with Italian you have thousands of words for everything and it’s much more complicated to be more concrete in the chorus with so many words and the sound of the words is so different and it’s so hard to make it work for heavy music or hard music.

English was the best choice, we decide the fact that we were meaning to go out of Italy with our music because this type of music is not popular in Italy, Italy is not exactly a rock and roll heaven, so it was normal for us to go out and try to work around Europe, at least in the beginning we need another language that could be understood by everybody.

So what is your live show like?
Andrea: Right now we are, we’re doing basically one of the first headlining tours in America, so on this run we bring out a little bit of production to make, even if we’re not playing very big venues, we’re playing clubs, we want to give something extra to the people just because it’s the first time we headline any of the cities, so we have new crowd and new people coming for the first time to see us and it’s very important that we make good impression to come back maybe later on with a bigger tour if the album will be working pretty well, like the song right now, “Spellbound” is doing pretty well on the radio here in America, so maybe here is a few months we will be able to push it further and make bigger tour. So this tour is especially to be present in the market and touch all the territories we haven’t touched on the “Music As A Weapon” with Disturbed, and do a lot of the new territories we haven’t touched at all with this new album so we’re doing promoting and doing a little bit of the radio, meet and greet, also the show for our fans It’s a very energetic show with a bit of production and even if the size of the venue is not very big it’s a good looking show and good sounding, so it’s nice event, for people who have never seen us it’s a great way for people to see us in the right dimension, like a very nice atmosphere because of the size of the venue. 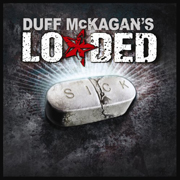