On February 17, 2023, Vancouver-based pop-rock act The Vidos will release their brand new album, Right In The Kisser!, via Rock Is Dead Records and 604 Records.

Right In the Kisser! brings to life the groovy, high-energy tracks that have wowed live audiences since the band’s inception back in their high school days. “Boomshackalacka,” the album’s opening track and lead single, sets the tone for an album packed with irresistible earworm hooks and witty lyrics layered with a bit of fuzz that captures the trio’s signature self-described “sludge pop” sound.

“Our anticipation surrounding this album release has perhaps caused more long term health repercussions than any of us faced during the pandemic. From hard-hitting ballads to post-punk segways, there’s a little something for everyone on this record. It’s freeing to release a project that truly represents our evolution as a band, and we hope you dig every second of it!”

Right In The Kisser! was produced by Danny Craig (One Bad Son, Bonds Of Mara, Whale and the Wolf), the co-founder of the new Vancouver-based record label Rock Is Dead Records (the first-ever label to be distributed by 604 Records), and member of chart-topping, million-selling Canadian rock band Default.

Right In The Kisser! Track Listing: 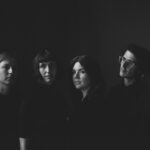