It doesn’t happen often, and it’s for a good reason, but it’s pretty awesome when you come up with a sound that’s unique unto itself. That’s precisely what Matthew Lurie has done with his quasi-solo project Matthew and the Mainstream and his sophomore full-length Rom Core. Combining piano pop, indie, alternative rock, baroque pop, and many other sounds, Lurie has cooked up a special set of ten songs that will appeal to a range of fans of a wide variety of different sounds.

Named after Lurie’s fondness for romantic comedies, the melodies are infectious, and there’s a certain endearing aspect to it all. As an artist that is very true to himself, Lurie tried to center Rom Core around the central themes of love and lovelessness, motivated by the fact that very few artists nowadays speak honestly about matters of the heart.

Commenting on the record, Lurie says:

“Rom Core tries to capture the ecstasy of heartache in plain spoken language. My greatest fear is that a single second of this record goes over anyone’s head. In other words, I am a lifelong devotee of the middle of the road. And I’m so grateful to make this record in LA, where working alongside your heroes is just another day on the job. You can’t throw a rock here without hitting a musical genius. Thanks for listening.”

Rom Core was an extremely long-term recording project for Lurie, recorded piece by piece, here and there between spring 2018 and fall 2021 in Los Angeles. He went into the studio with 25 demos and whittled it down to ten songs, with the close assistance of the production team of Thundershirt, Scott Seiver and Tim Young. Components of songs were recorded randomly or in between tours, shows, and at various points that worked throughout the COVID-19 pandemic.

In recording the album, Lurie wanted a very traditional pop record, a tribute to the lonely and sensitive ones, an acknowledgement to them that their feelings matter too. You can expect to hear an evolution of just what ‘Rom Core’ is all about, with Lurie already working on a follow-up album, in addition to his work composing for film and television. 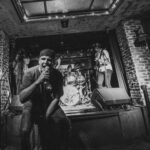