In Fear is a ferocious metal quintet from Bristol, UK, that has been unstoppable since their formation in 2017. Since releasing their debut EP Solace in early 2019, the band has gained ample footing in the UK scene, heading out on various tours, festival appearances and accruing over 600,000 streams online. The band has recently toured with the likes of Creak, Where Oceans Burn, Dreameater, as well as appearing on the main stage at UK Tech-Fest.

In Fear recently signed to UK label Year Of the Rat Records, and the new single “The Blinding White” is released on January 20th, 2023. The single continues the next phase for the band, where the band will release a brand new track every two weeks leading up to the album release. The band also announces their debut album, All Is. All Shall Be will be released on May 5th, 2023.

“This is the 2nd official single release from our debut album All Is. All Shall Be. which follows a concept story throughout, linking each song to the previous. Thematically it focuses on a character who is trapped in purgatory trying desperately to reach the afterlife, but they are doomed to repeat the same torturous cycle of events. In ‘The Blinding White’ the character is face to face with an angel, who shows them their past sins in life and gives them a chance to judge themselves fairly by wiping their memory of having committed these acts. The truth that they were indeed responsible for these sins is revealed to the character at the end of the song. Mistakes in life are inevitable, it’s the way we respond to these mistakes and our willingness to improve that counts.“

All Is. All Shall Be Track Listing: 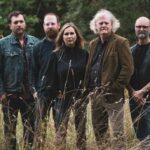 Jessica Rhaye and The Ramshackle Parade, photo by Mark Hemmings
Next Post