Following on from their recent release “Let Me Be” the pair have now released their new single, “Crimson Tears” which you can check out here:

Speaking on the project, Dave, who is in charge of drums and production on the record, explains:

“Several months after meeting Paula in 2010, she hesitantly shared with me her past decade-long career as the lead back up singer for Wayne Newton. She later played me some of the demos she recorded throughout the years and I was floored by her sonically soothing, rich tone and natural, instinctive ability to harmonize. I was determined to persuade her to return to her creative self. It’s been a deeply gratifying journey witnessing this music come to life.”

Drown In Emotion was recorded and produced at Ritmo Studio by Dave Lombardo. The album will be released on limited vinyl via Three One G on February 10th. Preorder your copy here. 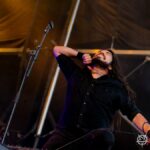 Swim The Current Drop Single/Video “We Are Not The Same” feat. Marcos Leal of III Nino 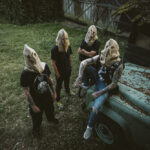