Sometimes the best bands are the ones that are hardest to describe because they don’t neatly fit into any one package. Atsuko Chiba aims higher than your average group, with their brand of experimental, adventurous rock, combining past, present, and even future sounds. You’ll get a heavy dose of this on their brand new studio record, Water, It Feels Like It’s Growing, which you can hear for the first time today, but will be officially available tomorrow, January 20th, via Mothland.

Discussing the album and where it stands thematically, the band offers:

“As opposed to our last album, which was about introspection, spacetime and the personal journey, the themes explored on this new album are related to our environment and our reaction to it. Though not meant to be strictly political, our references stem from highly politicized movements and ideas. Division and group ideology are heavily explored. A prime example is the weaponization of vocabulary used to distract, displace and alienate us, forcing us to pick sides on every front. Our lyrics also strongly denote our innate love for all living things, encompassing a hopeful, if somewhat violent, plea for change.”

This, their third studio record, was recorded early last year when the experimental rock quintet hunkered down in their custom-built recording studio, Room 11. These songs go places sonically that other bands wouldn’t dare venture. And not that that is a bad thing; it’s just evidence of the musical risks that Atsuko Chiba are willing to take. Comprised of six new tracks, the songs combine post-rock, progressive rock, and krautrock but are also accessible for the more casual rock listener. That’s probably because the songs are cohesive, and even though they are offbeat, they exist within a framework of pop music from the past and present.

This year marks the tenth anniversary of releasing the band’s debut full-length Jinn. In that time, they have performed across Canada, the United States, and Europe, with groups such as …And You Will Know Us By The Trail Of Dead, Big Business, Duchess Says, and King Buffalo. Some acts are made for the live setting, and you can include Atsuko Chiba in that category, with their combination of their experimental rock with video and light installations triggered in real-time by the band, creating an immersive, riveting audiovisual experience. It all combines to go the extra mile, creating a rock n’ roll experience like few others. 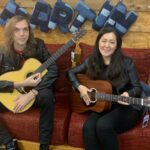 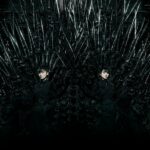