Napalm Death, Skindred and Volbeat aren’t three bands you’d initially think of putting together on a line-up, but someone did, and it turned out to be fantastic, as the packed Leeds Arena found out.

Openers Napalm Death are absolute legends, with the four members having been together for the last 30 years, 16 studio albums under their belt, and the shortest song ever recorded at 1.316 seconds long, “You Suffer,” which got a mid-set airing, but you might have missed it if you weren’t paying attention.

Looking dwarfed by the immense stage setup (more on that later), they scorched through their 25-minute, 13-song set, leaving some of the crowd ecstatic and others a bit bemused. A heartfelt speech from Barney about how vile some people labelling other people as illegal is and how absolutely everyone of any race, gender or whatever is welcome at a Napalm show is just one of the reasons he is a hero to many, another is his unique stage presence. A brilliant short, sharp shock to the system to open the proceedings.

Speaking of stage presence, there is one person out there right now who absolutely has it. On any stage, in any venue, Skindred’s Benji Webbe is THE ringmaster. The Freddie of our generation. Dressed all in black, looking as badass as Batman, he conducts ceremonies and has everyone in the palm of his hands.

They make use of the huge stage set that Volbeat have brought with them. It looks like it’s Metallica’s old Snakepit stage repurposed as The Parasite Pit, with a walkway forming a barrier around a few hundred lucky VIP fans in the middle and is perfect for a performer like Benji. Comically though it looks almost too big for the Leeds Arena, as this venue is unique in that it is wider and narrower than normal arenas, so you get a better viewing experience from wherever you are.

As Mikey and Dan take tentative steps onto the walkway Benji stomps right the way around and gets up close with the fans at the back of the room. Halfway through the set, Arya left his drum kit and ran all the way round to give Benji a cheeky head rub while the Benny Hill theme played over the speakers which was brilliant.

The Skindred standards all sounded great, but new track, “Gimme That Boom,” from their next album Smile, sounded fantastic and showed they haven’t stopped writing the bangers that made everyone fall in love with them. Closing with “Warning” and the obligatory Newport Helicopter, they took a well-earned lap of honour around the walkway with Carly Simons’ “Nobody Does It Better” ringing out around the arena. That’s probably the truest statement possible because nobody does.

Having largely been in darkness for most of the night, suddenly, the whole stage lights up like a pinball machine to welcome Volbeat to the stage, and it reveals the true scale of the production they have brought with them. It’s huge. Massive screens at the back, drums on a giant riser, and a light show Pink Floyd would be proud of.

Michael Poulsen got the loudest cheer has he strode up to the mic and launched into “The Devil’s Bleeding Crown”. Making his way to the front of the stage, he got up close and personal with the audience. Notoriously suffering with illness and vocal issues, he does ask for help from them at times, but his performance doesn’t seem to suffer for the most part. You can tell in between songs he isn’t 100% but gives it all, delivering some of the best rockabilly-tinged metal around.

“Last Day Under the Sun” and a perfect rendition of Johnny Cash’s “Ring of Fire” sees the crowd take over vocal duties before transitioning into “Sad Man’s Song.”

An instrumental version of “Becoming” allows him to rest his voice for a few minutes. “Becoming” sounds like the Metallica song Metallica have been trying to write for the last 20 years and was brilliant. A highlight amongst many in a great set.

The 4-song encore left the audience completely satisfied, and you couldn’t possibly argue that you hadn’t gotten your money’s worth. Such a brilliant show to close out the year. 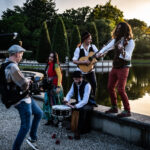 Inspired by Cosplay, “Never Dream Alone” is A Fantastical Ode To Dreamers