Albany’s pop-punk natives State Champs just wrapped up their “Kings of the New Age Tour” in support of their new full-length album released earlier this year—but not without a sold-out hometown show to close out their one-month U.S. tour.

Frozen Fest has become a staple in many pop-punk fans’ Holiday plans every December. The band began this tradition in 2018 at Upstate Concert Hall in Clifton Park, NY, and has continued it every December since (except in 2020 due to COVID-19). The annual event is now at the new Upstate Concert Hall venue—Empire Live, in Albany, New York. This year offered the usual VIP upgrade experience to hang with the band beforehand and the added bonus of Frozen Fest exclusive candles and beer available for purchase to anyone who attended the show.

Being a hometown show for the entire band, they were surrounded by their closest friends and family while playing an eclectic set for the packed room. Smoke machines, cannons, and balloons galore—the band opened with “Just Sound,” and the party began.

As someone who has been to many pop-punk shows (and many, many State Champs shows), there is no energy like that found in the room for a State Champs show, let alone a State Champs hometown show. The crowd moshed, crowdsurfed, danced, and belted out word for word the lyrics to every song played throughout the night. During “Half Empty,” a new song off their full-length Kings of the New Age, the band brought out their tour manager to sing along with them—a truly heartwarming moment to witness.

The night flew by as the band played lots of hits—“Secrets,” “Deadly Conversation,” and “Elevated,” to name a few. The energy didn’t let up, even after the show came to a close and fans excitedly chattered with one another, grabbing last-minute merchandise and pictures together.

Another Frozen Fest in the books. Another night to remember. We will be patiently awaiting this day of celebration, unity, and music to come again next year. 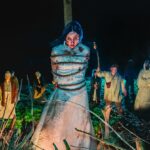