There’s no dipping your toe in on this one. We are about to take you for a deep dive into the captivating world of Local Suicide courtesy of their new music video for “Agapi,” featuring the enchanting vocals of Greek singer and artist Sissi Rada. The video is visually dazzling, with some incredible camera work that takes you underwater and to the depths of what appears to be the ocean floor.

The video was conceived by director Ceyda Yagiz, a Paris-based filmmaker and DJ originally hailing from Turkey. There was a lot of thought and brainstorming that went into the conception of this clip for Yagiz, as she viewed the song as an exploration of the mind and its very depths, which is emphasized by the beautiful shots and camera angles that you see here in the video. And while it was Yagiz’s ideas that provided the video with a purpose, it all wouldn’t have happened without the camera wizardry of Istanbul-based photographer and director Mehmet Gökdel, who brought Yagiz’s vision to life.

Explaining her interpretation of the song and how she developed its visual accompaniment, Yagiz explained:

“‘Agapi’s’ universe is the sea, mother of all that lives according to Jungian archetypes. Inspired by the lyrics, I imagined ‘Agapi’ as a journey to one’s subconscious where the hidden surface lies and is dealt with. Colour blue being the ultimate cure for pain, holds our hand in this dreamlike bath.”

If you’re looking for the song, it can be found on Local Suicide’s debut album Eros Anikate, released this past May via their record label Iptamenos Discos. In writing the song, the duo and Rada intended to offer a musical interpretation of what loves sounds like. There’s a certain delicateness to both the song and the video, with Rada’s alluring voice and dreamy vocals going very well with the eerie, almost ghostly synths devised by Brax Moody and Vamparela, the two halves of Local Suicide. Rada has made her mark as a vocalist thanks to her hypnotic-sounding vocals that create an intoxicating, emotional atmosphere. “Agapi” is a winning combination of artists who are going a long way to establishing themselves as some of today’s premiere ‘technodisco’ artists. 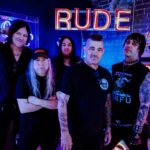 The Black Halos in 2022, photo by Michael Crusty
Prev Post

Fahrenheit V13: The Black Halos’ Jay Millette on His Fave Books and Passion for Reading