After representing their home country, the Philippines, at the Wacken Open Air Metal Battle in Germany, progressive metal heavyweights ORCA have since signed with renowned record label Tower Of Doom. Alongside this, the band is proudly introducing the debut single they are releasing under their new label. This is “Sunset Limited,” available worldwide on December 7th on most music streaming services.

The band comments on the new track:

“‘Sunset Limited’ is based on contrasting ideologies faced by modern man, i-e, atheism and firm belief in God. Between believer and non-believer, between optimism and pessimism and between hope and despair.” 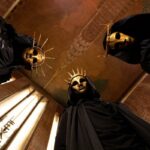