When you grow up within the literal spirit of rock n’ roll, it’s inevitable that some of it is going to rub off on you, like with Louis Emory. The singer-songwriter is situated in Troy, New York, a short drive north of Woodstock, home of the world’s most historic rock n’ roll festival, and a place where legendary groups like The Band recorded their first record, Music From Big Pink. Emory wrote his debut EP Love Italy with Shelly Yakus, who helped engineer and mix that classic album, and as a result, Emory couldn’t help but feel a little bit taken away by the whole process.

Released last week, on October 21st, the six-track Love Italy is something of a tribute to the country of Italy itself. Emory grew up in an Italian-American home, which is from where he derives his appreciation and connection to Italy. It was the stories of his parents and extended family that helped him grow a great bond with the country. He finally was able to visit in 2017, which sparked in him a passion for Italian history and culture, as he began to read books on the Renaissance, Italian art, architecture, and the history of its major cities. When the pandemic came along, Emory began to long for Italy, and it motivated him to write and record this EP eventually.

Emory joins us today for a special track-by-track rundown of Love Italy, explaining the wonderful inspiration and insight behind the writing of these songs.

“There’s an energy to ‘Roma,’ something you can feel when walking ancient streets layered with centuries of history, interwoven with a vibrant, modern city. I wanted to try to capture that feeling, that excitement when you finally touch down and have your first espresso, while also honouring the beautiful Vitruvian architecture and glory of the Roman Empire.

“The song is a tribute to the specific places that really moved me – an attempt to turn people onto the history and entice them to visit. And for anyone who’s been there, I wanted to reignite that feeling and encourage them to go ‘back to Roma.’”

“I was so inspired by Venice, its art, architecture, and light, and I found the water and surrounding beauty so soothing to my soul. Venice defies all laws of logic, and there’s a magic there that appeals to the romantic in me. Like ‘Roma,’ I wanted to capture that feeling while giving a nod to the people and places that shaped it – Titian, Palladio, Sansovino, Casanova. We even added the subtle cello and violin parts to give a little nod to Vivaldi.”

“I was inspired by Bob Dylan’s ‘Lily, Rosemary and the Jack of Hearts,’ and wanted to write a long-form song. Inspired by (Renaissance era Italian banker and politician) Cosimo de’Medici, his life, vision, and legacy, I tried to put myself in his shoes and write from his perspective. Cosimo had a vision for Florence and wanted to make things better; His rival, Rinaldo Albizzi, didn’t share the same vision, and when his people took power, they brought charges against Cosimo, put him in jail at the top of the Signoria for a month, and tried to have him assassinated by poison.

“Eventually, support for Cosimo grew, and he was exiled to Venice. I included references to Dante’s (Alighieri) Divine Comedy by having Cosimo have a dream/vision that Virgil is leading him through the underworld where Rinaldo and his ancestors are in the 9th circle, counting their pieces of silver over and over again into eternity for their treachery.

“There are also references to the Masters (architect and engineer Filippo) Brunelleschi and Donatello. It was the first song we recorded for the EP, and it’s the longest, though it was originally even longer!”

“The first five songs of the Love Italy EP were finished, and we went to Italy to film the music videos. I kept having the thought that the EP needed one more song. I came home and started to feel the seasonal vibrations – with the fall coming, I felt stuck and uninspired and was longing to be back in Florence. I wrote about how I was feeling at that moment, reminiscing about our trips, the piazzas, and the hope that one day we might call Florence and Italy home.”

“The inspiration behind this song came from my first trip in 2017. We had a rental car and were driving in rural Tuscany when we lost reception – our GPS stopped working, and we were lost. We started back-tracking and saw a barrel next to a dirt road with a hand-painted sign that read ‘Wine.’

“We decided to follow the road, which led us to the tasting room of Querceto di Castellina, a small, family-owned organic winery in Chianti, where we were met by Laura, the family matriarch who told us stories about her life and the winery. The wine and the whole experience were unforgettable, and two years later, my wife and I got married and had a small reception dinner right there on the tasting room terrace.”

“I was deeply moved by the Pazzi Conspiracy and inspired by (statesmen and banker) Lorenzo de’ Medici (‘Lorenzo the Magnificent’), his patronage of art and vision. I also wanted to pay homage to Master (Sandro) Botticelli, as well as the tragic love story of Simonetta and Guiliano (Lorenzo’s brother who was murdered in the Duomo during the conspiracy). The song is written from Lorenzo’s point of view, almost like a letter to a friend in old age, reminiscing about his life. He, like his grandfather, Cosimo, was one of the great minds and leaders of the ages.” 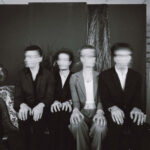 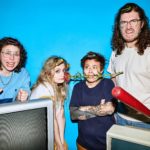 Lily Mao & The Resonaters, photo by Michelle LoBianco
Next Post