Up until 2017’s magnificent Shadows Inside album, Ohio metalcore chaps Miss May I were spitting out a record at least every year or two. Well, it’s now been five long years since their time, and following a spate of singles culminating in the Free Fall EP, the release of Curse of Existence couldn’t come around quick enough.

An album steeped in frustration, Curse of Existence generally leans towards the harsher end of the metalcore scale, but like previous offerings, the band injects some well-placed melodies into the fury. Opener “A Smile That Doesn’t Exist” kicks things off, demonstrating this perfectly as, amongst the savage riffs and Levi Benton’s sandpaper screams, come some seamlessly integrated clean passages. It’s during the opener as well where we get to hear Benton’s emotionally-charged lyrics, again setting the scene for the rest of the album.

Tracks like “Hollow Vessel” see Benton expose his mental health stife further, and you can almost feel how much of a struggle the last five years, the last two in particular, must have been for the frontman. Hearing him screaming, “Pick myself apart, piece by piece, dying slow. Isolate, inner voices so loud, hard to ignore…,” you know you’re in the company of a man baring his soul for the world to see. This lesson in honest reflection continues through “Free Fall,” where Benton screams, “Life passes by, days feel irrelevant. A world of lies, hatred, malevolence” – from a lyrical point of view, Curse of Existence is just undiluted, raw emotion.

The album wraps up with “Bloodshed,” a song which, lyrically, shifts away from the mental health/depression themes of the rest of the album and into more “political” waters. A savage end to the recording, the chorus finds Benton screaming “farewell to conformity, farewell to division, farewell to tyranny, farewell to corruption,” and it’s hard not to imagine who this song is aimed at. Given the more personal nature of the rest of the album, “Bloodshed” definitely shifts the target elsewhere but is still packed full of emotion and heartfelt rage, the kind of which has made the five-year wait for this album very much worth it.

1. A Smile That Does Not Exist
2. Earth Shaker
3. Bleed Together
4. Into Oblivion
5. Hollow Vessel
6. Free Fall
7. Born Destroyers
8. Unconquered
9. Savior of Self
10. Bloodshed 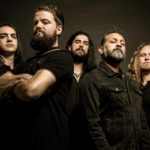