It’s been a rocky few years for Bay Area metal titans Machine Head, but recent tasters for their returning album ØF KINGDØM AND CRØWN and a triumphant (not-so) secret set at Bloodstock Open Air earlier this month under their belts, Machine Head c.2022 look like an altogether more dominant beast. Kickstarting this new chapter of their career, they open with a ten-minute epic in “SLAUGHTER THE MARTYR,” a track with everything you could want from a Machine Head single.

An sublime slice of Machine Head metal, “SLAUGHTER THE MARTYR” packs so much punch into those ten minutes that the band is careering into “CHØKE ØN THE ASHES ØF YØUR HATE” before you know it. As a tone-setter for the rest of ØF KINGDØM AND CRØWN, it’s a massive statement of intent. A bold move at ten and a half minutes long, there is, thankfully, simply no fat or bloat anywhere throughout the track or, in fact, the rest of this enormous album.

Hearing Robb Flynn and bassist Jared MacEachern tag-teaming on vocals throughout the recording, tracks like “BECØME THE FIRESTØRM” find this new incarnation of MH in blistering form. Epic and dramatic while at the same time retaining that raging, neck-snapping groove, this concept album based loosely around the Japanese anime series Attack On Titan, ØF KINGDØM AND CRØWN contains some of the most majestic material ever to grace the group’s catalogue with the pairing of “MY HANDS ARE EMPTY” and “UNHALLØWED” showing off the more melodic, dramatic side to this stunning piece of work.

“ASSIMILATE,” a movie-like interlude, sets the mood for the mid-paced chugger that is “KILL THY ENEMIES,” while “NØ GØDS, NØ MASTERS” sees Flynn and co using that familiar melodic/breakneck formula that has served them so well throughout their career. Of course, if it’s outright face-smashers you want, “BLØØDSHØT” and “RØTTEN” will scratch that itch before the awesome “ARRØWS IN WØRDS FRØM THE SKY” wraps up this flawless display. In recent years, Robb Flynn has faced more than his fair share of critics within the metal community, but in ØF KINGDØM AND CRØWN, one of modern metal’s most iconic frontmen has returned with an album that is quite simply untouchable. 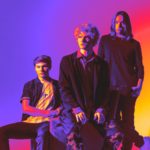 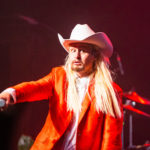