Life is like a curve, full of ups and downs, highs and lows, and ebbs and flows. As Saint Christopher acknowledges with his brand new single, sometimes we fly high, and then suddenly it all comes “Crashing” down. Previously the frontman of Los Angeles indie rockers Arms Akimbo, Saint Christopher is the creative outlet of LA pop performer Christopher Kalil, who is set to release his debut full-length record Pop Shit on October 7th.

“Crashing” is an ideal summer song, with a sunny pop beat and an infectious synth sound. This is a brand new foray into a brand new sound for Kalil, detached from his indie rock roots and now fully entrenched in a world of emo pop. Along with some cheeky religious symbolism with his own unique commentary on modern culture, Kalil has created quite the creative platform for himself with Saint Christopher.

In his own one-of-a-kind fashion, Kalil summed up his new single by saying: “Falling for someone is great… Until it’s not. One day you’re riding the high into the clouds, and the next, you’re headed face-first for the pavement. But choosing to be vulnerable despite the risks is worth celebrating. We’re all looking to find a bit of ourselves in everyone, and if you embrace the chaos of love, you just might find it. ‘Crashing’ is all about getting ahead of yourself, saying the wrong thing at the wrong time, taking a big swing and missing, and failing with the best intentions. So, keep at it. Vulnerability is the greatest strength we have.”

“We’re all looking to find a bit of ourselves in everyone, and if you embrace the chaos of love, you just might find it.”

For a debut album, Pop Shit is quite expansive in its vision. It’s a piercing commentary on the current music industry and an impassioned expression of the ups and downs of getting by as a musical artist as the conditions currently present themselves. It’s a statement on popular culture and how it affects us as individuals.

The pandemic served Kalil well, creatively speaking, as it offered him the opportunity to buckle down and get to work on fleshing out just what Saint Christopher was capable of being. He released a trilogy of mixtapes entitled Always Feel The Same, I Learned To Kill My Brother, and When Heaven Calls, I Won’t Be Home, which collectively accumulated over 650,000 streams. Now with his debut album about to hit, Kalil is raring to go, with a focused, artistic vision of who he is and what he’s capable of. 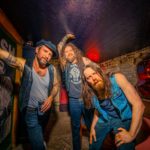