Crossroad Crooks‘ self-titled debut album finds each band member prominently in their element. The trio work in symbiosis to create a rollicking ride and an effective message. Out now, the Connecticut-based alt-rock group culminated years of experiences and infused intentionality by every standard to their 8-track record. “The songs sat as rough demo ideas, making us stew over every nook and cranny of each part up until this point. Others were written far more recently, but they cover a range of musical elements and lyrical themes,” the band explains.

Spanning subjects as far and wide as love lost to gun violence, the group explains that stagnation was nowhere a part of the album. “No one track is exactly alike from track one to track eight. I like to think it’s musically cohesive, but not redundant.” In this way, it’s the band’s dynamicism, a trademark of their musicality from the beginning, that sets Crossroad Crooks apart. There’s something to be found in the album for almost any kind of listener, from head-banging rock ’n’ roll, passionate vocals, melodic experimentation to heartfelt lyricism.

The group, composed of Mika Davis-Penta (vocals and drums), John Leonard (guitar and production), and Jedd Chlebowski (bass), work skillfully to create a well-rounded record that feels raw in essence but precise in practice. There was no detail foregone, as the band plays with impassioned and technical brilliance. Tracks like “As She Was,” a gut-wrenching song about the realities of moving forward from a relationship that once was, is a moment in which Davis-Penta’s pristine vocals are able to shine.

On the other hand, their reimagined version of The Animal’s classic track “House of the Rising Sun” allows Leonard’s polished yet raucous guitar solo a moment in the spotlight. And, of course, it’s Chlebowski’s bass playing that serves to elevate their harmonies with an undeniable groove. In conjunction, the trio is categorically powerful as they speak bluntly about the turmoil of life and its complexities. Crossroad Crooks is an album both of surrender and resilience, as the group bears it all in the name of rock. 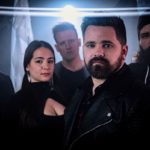