An important landmark is coming up next week, and it’s without a shadow of a doubt very much worth celebrating. On June 16th, it will mark 50 years ago to the day that the legendary David Bowie released his landmark, career and genre-defining fifth studio album, The Rise and Fall of Ziggy Stardust and the Spiders From Mars, or as it has since become known, Ziggy Stardust. Special anniversaries mean that it’s time to pay tribute, and that’s what we’re doing today with the unveiling of Sergeant Thunderhoof’s exciting rendition of the classic Bowie track “The Jean Genie.” While remaining true to the swagger and pop of the original, the guys in Sergeant Thunderhoof have made sure to put their stamp on the song, rocking it up with crunching guitars, that add a little bit more groove to the song structure.

Coming up on June 16th, you’ll be able to hear this track and much more on Pale Wizard Records’ second instalment of their series, paying tribute to Bowie and the Ziggy Stardust record. The compilation features eleven original versions by eleven different modern hard rock artists that were hand selected by the Pale Wizard staff. Each artist pays tribute to Bowie in their own unique, modern way while paying homage to this classic Bowie masterpiece.

Offering his thoughts on the song, Dan Flitcroft of Sergeant Thunderhoof says:

“Working on this classic Bowie track was great fun. We wanted to retain the garage rock swagger of the original without sounding like a carbon copy. It certainly showed me how versatile Bowie was as a singer as his vocal placement is really unique.”

Titled Ziggy Stardust: 50 Years Later, the album also features contributions from Raging Speedhorn doing “Suffragette City,” Mother Vulture’s version of “Starman,” and Sail reinterpreting “Five Years.” Ziggy Stardust is an album in need of celebration, not just for what it did for Bowie’s career, but for what it did for music. It’s retrospectively viewed as one of the great rock records of the 1970s, and it solidified Bowie’s place as a global phenom.

Along with this awesome cover of “The Jean Genie,” Sergeant Thunderhoof also just released their epic new album This Sceptred Veil this past Friday. Recorded in their hometown of Bath, the album is the group’s darkest and densest release yet. It’s an exciting time, not only to look back but to also look forward, for a band that has really hit their creative stride. 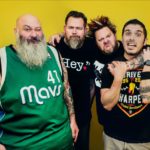 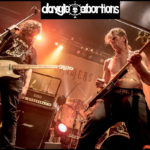