If you’ve had the radio on in the past year and a half, there’s no doubt that you’ve probably heard the song that goes a little something like “Some night when I think about you,” and this earworm is something you’ve probably caught yourself humming randomly at times. This song is an incredible ode to Glass Animals’ talent for crafting beautiful pop songs and is just one of the many hits in the Glass Animals arsenal of songs. I was ever so lucky to get to experience this first hand on Thursday night when they came through Oklahoma City and played at the OKC Zoo Amphitheater.

Before them, though, we had the duo from L.A. known as Mob Rich. Two very talented dudes who were just the perfect recipe for opening up this concert and getting the crowd ready for GA. They had great stage presence, and I loved that they covered Weezer’s classic song “Say It AIn’t So” and did it such justice.

There was only one opening act this night, so up next was the band that everybody had been waiting for, Glass Animals. Before I get into how great their set is, let’s set the scene.

This was one packed venue. I don’t think I’ve seen a venue this packed in quite a while. And then there was the stage setup, which I think was incredible. The coolest thing, to me, was the massive screen they had, and it was set up to look like a computer desktop screen from the late 1990s/early 2000s. It also would countdown to the show, and it would display this by showing how much “data” there is left to transfer as if it was a file being uploaded. It is truly hard to describe, and you just have to see it in person. Also, the whole stage design and light design were incredible, and even if you hate their music, you have to go to check out just that.

Besides the stage design, you’d love their stage presence. GA has a very dancey, trippy vibe to their music, and that really translates to their live show. The lead singer (Dave) is all over the place, dancing to the music and rocking out on his electric guitar. He also really interacts with the crowd as well and gets them hyped up.

GA also played some of my favorite songs of theirs, like “Tangerine,” “Gooey,” and “Space Ghost,” just to name a few. All of these songs got the whole place dancing and moving to the music.

Basically, this is one of the bands you have to see live. There is no doubt that you’ve heard a couple of their songs (mainly “Gooey” and “Heatwaves”), and even if you don’t like their sound, then you’re in for a treat with their lighting design and stage setup. I had such a great time that I’m even looking into trying to see them again on this tour, which doesn’t happen a lot with me. Hopefully, I get a chance, and hopefully, you’ll check them out before they head back home across the pond to Europe. 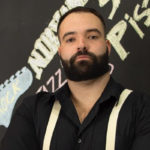 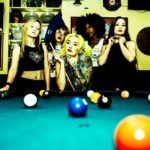