Coming from the country which gave us the mighty prog/tech death metal giants Gojira, it should come as no surprise to find that Bordeaux-based technical death metal outfit Exocrine performs to the same ridiculously high standard on their new album, The Hybrid Suns. Even before you’ve had time to catch your breath as this record slams into the title track, the French outfit has hit you with a wall of symphonic guitars.

A simply dazzling display from the French outfit, The Hybrid Suns combines finger-bending guitar work with the death metal equivalent of getting your face slammed into a wall. From the epic “Horns,” a track which features pig squeal vocals, pummelling blast-beats and mind-bending guitar wizardry, to “Vortex of Shadow,” a track which pulls you all over the place, on paper, this album could be a complete mess if played by a lesser band, but this is very much not the case with a musical genius like guitarist Sylvain Octor-Perez steering this ship.

Elsewhere, you might want to prepare to pick your jaw up off the floor when you get a faceful of the ridiculous “Watchtower” Is it cinematic? Is it symphonic? Is it the musical equivalent of being hit by a train? Well, it’s all of those things in three and a half minutes of gloriously over-the-top technical death metal. And I guess that is the beauty of The Hybrid Suns and Exocrine in general. In the nicest possible way, this album plays out in the most ridiculously over-the-top manner. “End of Time,” as a prime example, is primarily a wall of blast beats, guttural vocals and grinding death metal, but, should your ears be more fine-tuned, the guitar work of Octor-Perez and Nicolas La Rosa, weaving away under the brutality is simply phenomenal.

Having been honing their magical craft since forming in 2013, the French band has unleashed this, their fifth recording, an utterly flawless display of genre-pushing, boundary-destroying, experimental brutality. The Hybrid Suns sees Exocrine push the technical death metal to absolute breaking point with an album that is not only going to take some topping by the band themselves but will also leave the rest of the genre weeping into their guitar cases. 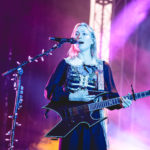