It’s the beginning of a long race for Imogen Clark, and she couldn’t be better prepared for what’s to come. Beginning on April 22nd, she set out to perform 100 concerts in 100 days, a phenomenal feat that is off to a sizzling start, thank you very much. She’s adding to that momentum today with the premiere of her new studio session music video for “Enemy.”

The Australian singer and guitarist released the song on the same day of her tour announcement, an up-tempo indie rocker about escaping a manipulative, abusive relationship. The song has undergone something of an evolution since it was first penned just before the beginning of the pandemic lockdown, alongside co-writer Alex Lahey, who is becoming an indie rock star in her own right.

Commenting on the video for “Enemy,” Clark says:

“I love having this video because it captures the magical day in the studio when we cut this song. I’ve never done an entire song including the final vocals in one session before; it was a sprint, not a marathon, and it meant we never lost our momentum and couldn’t overthink things. I think you can see how exhilarating it was and how much great energy and passion (bandmates) Joji, Adam, Harry, Earl, Dee, and Richie were bringing to the track. Plus there’s a super cute dog who really added a lot of vibe to the session.”

The original version of the single was titled “My Own Worst Enemy,” and it was included on Clark’s 2020 EP Making of Me. Within the handful of live shows she has played since the pandemic’s start, the song has become a fan favourite, and as a live number, it morphed into a faster, leaner version. Working alongside producer Joji Malani, former guitarist of Gang of Youths, Clark was dead set on hitting the studio and recording this new, more energetic version of the song. The results are an impressive display of indie power.

Clark’s 100 shows in 100 days will take place in both Australia and the United States, and be spread across different mediums, such as the traditional live concert, virtual and live-streamed shows, unplugged sessions, and interviews. It’s an impressive goal for an impressive artist, determined to make up for lost time, and with the songs and swagger to pull it all off. 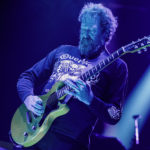