Formed in Glasgow back in 2005, Scottish metal quintet Bleed From Within head into the seventeenth year of their career armed with Shrine, possibly the strongest album of their time together. Having already built a reputation for writing epic metalcore, Shrine fires out of the starting gate with the thunderous “I Am Damnation,” a track which certainly takes a shot of inspiration from more recent Parkway Drive output. Big riffs, Scott Kennedy’s gruff Scottish howls and a grandiose, dramatic air, the song has it all.

Following that almost perfect opener, the Scots hurtle through their ferocious “Sovereign,” an absolute skin-melting slab of metalcore before the dramatics which herald the start of the third track, “Levitate,” form the perfect lead in to a track which sees the Scots effortlessly blend soaring melodies and bone-crunching metalcore with those gargantuan sweeps of orchestral moods that simply take this album to the next level. While “Levitate” is probably the first moment where it becomes clear how big Bleed From Within has gone on this record, Shrine as an entire body of work is absolutely colossal. Everything from Kennedy’s roars to the musicianship to those orchestral passages simply pushes this album to a new level.

“Flesh And Stone” starts out in an almost industrial, machine-like fashion before plunging straight into more neck-snapping crunch whereas “Invisible Enemy” is probably the first time during the album where the Scots rein in the rage to take Shrine down a more mid-paced, moodier path. Giving Shrine a short breather, once “Skye,” the interlude breaking up the record bleeds into “Stand Down,” business resumes with both “Stand Down” and “Death Defined” picking up from the darker, chuggier direction of “Invisible Enemy.” An increase in the dramatic moods and pumped full of foot-to-the-floor metal, “Shapeshifter” is one of the finer moments of the back end of this album although it has to be said, both “Temple of Lunacy” and “Killing Time” give it a run for its money.

By now, it’s hard to deny that the Scots have really upped their game on this record but, in album closer “Paradise,” it feels like the group has left the best until last throwing everything but the kitchen sink into the final four and a half minutes. Dramatic pianos and haunting atmospherics create a dark, suffocating air as Shrine sign-offs in a more ominous mood. While it might be a shift in tempo from some of Shrine’s more face-battering moments, the unsettling moodier feel created throughout the track is certainly one that opens up a whole new world for the band. 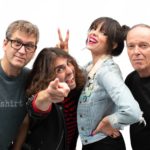 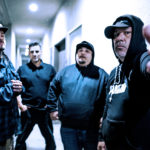